Since summer is half over, it is obviously time for some summer projects.

I started a bag at my spring retreat (where I never finished anything). This week, it occurred to me that it is a perfect match for a dress I am planning to wear to a family event next week. I also realized that it was more "summery" then the bag I am currently carrying. So this week's finish: 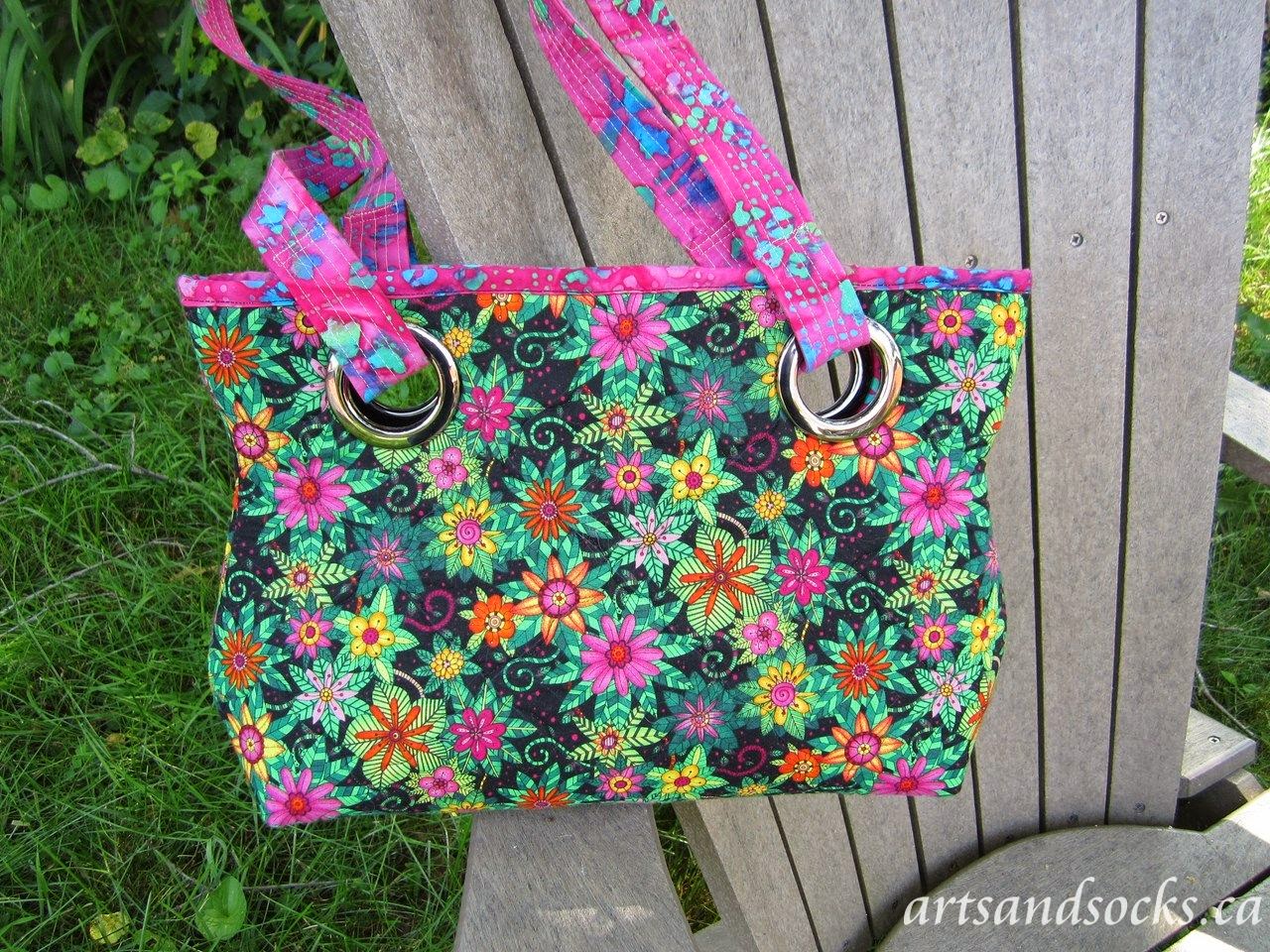 It took me less than and hour to finish, so I wonder why it has been sitting so long! I was humoured to find that someone has been eating acorns in the Muskoka Chair. 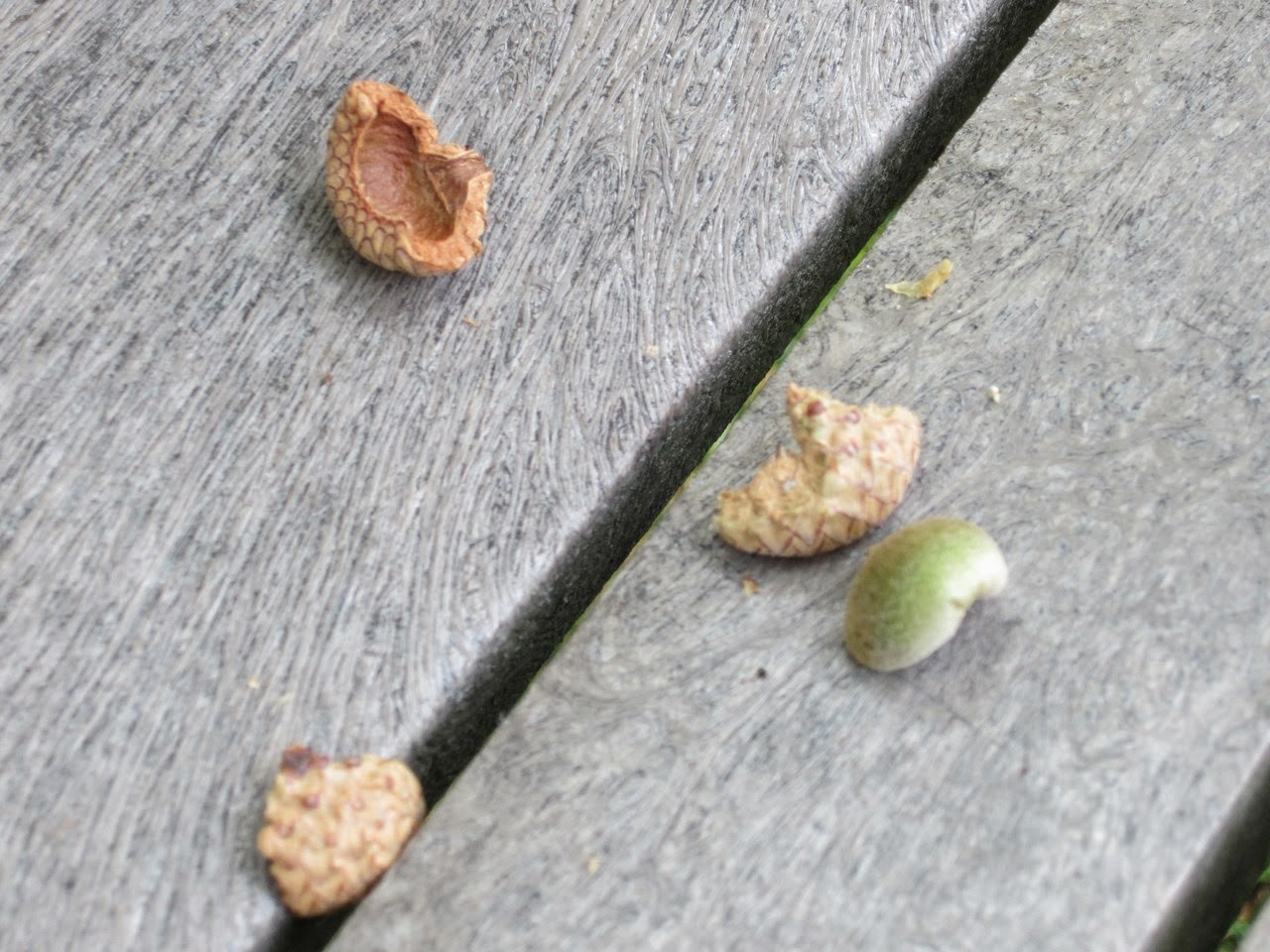 I have also been working on a shawl that I think looks very summery. 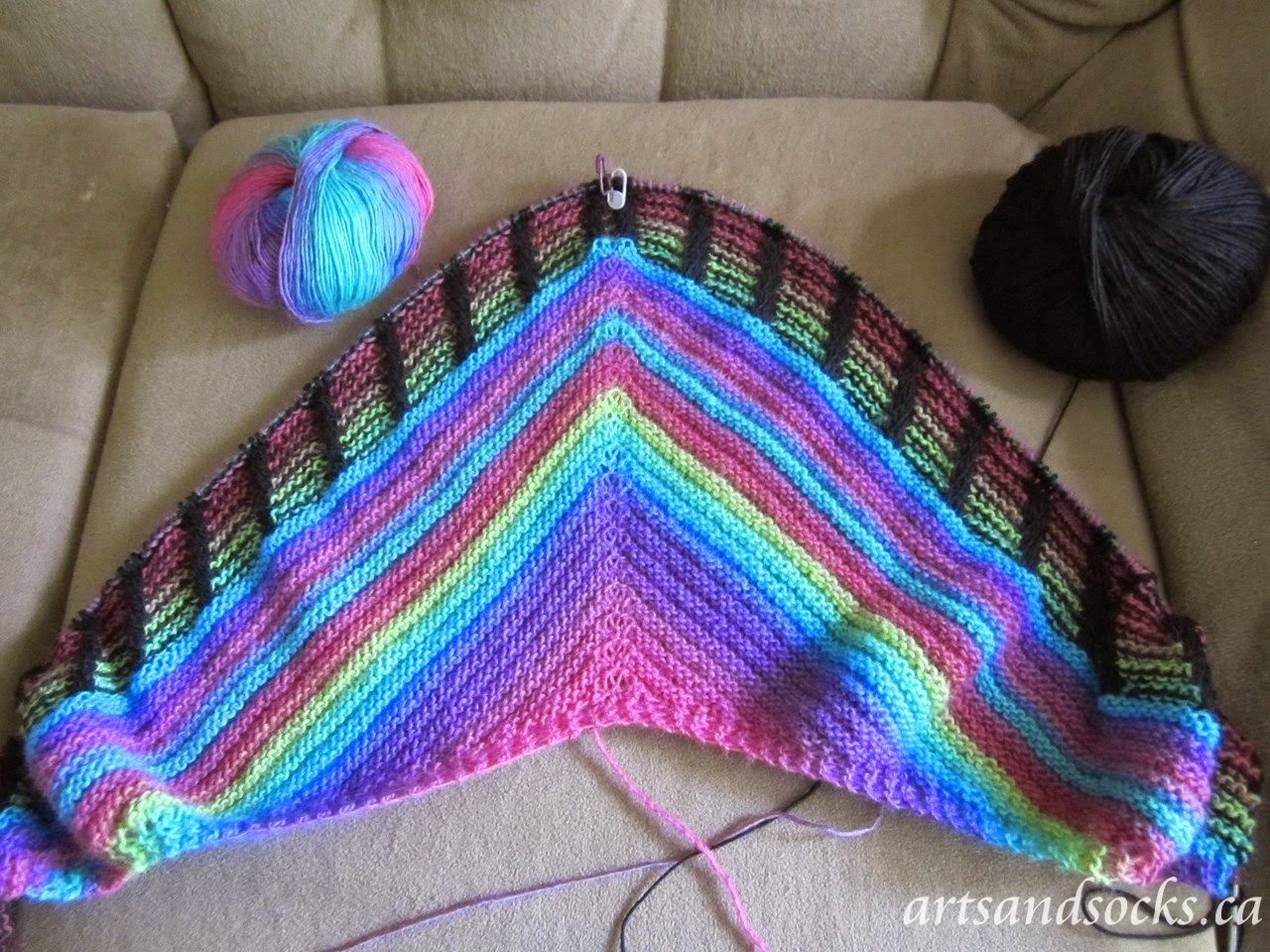 I love that yarn, the colours are wonderful. It is Knit Picks Chroma, in Roller Skate. Fortunately I have more!

The kittens have been busy, helping with home renovations. 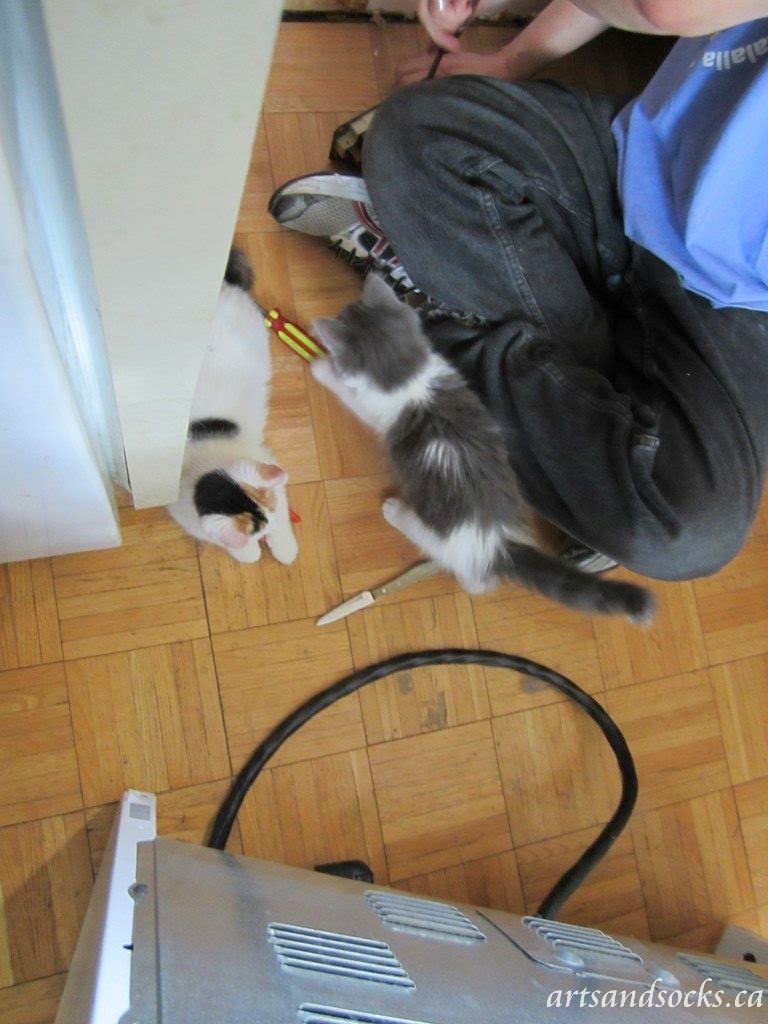 Erika is ready with the screwdriver, while Leah has a firm grip on the pliers!

Knit Out at the Library

On Friday, I attended the first"Knit Out" at the Hazeldean Branch of the Ottawa Public Library. It was a lovely sunny morning, and knitters of all ages were encouraged to come and spend a morning, knitting under a tree on the lawn of the Branch. 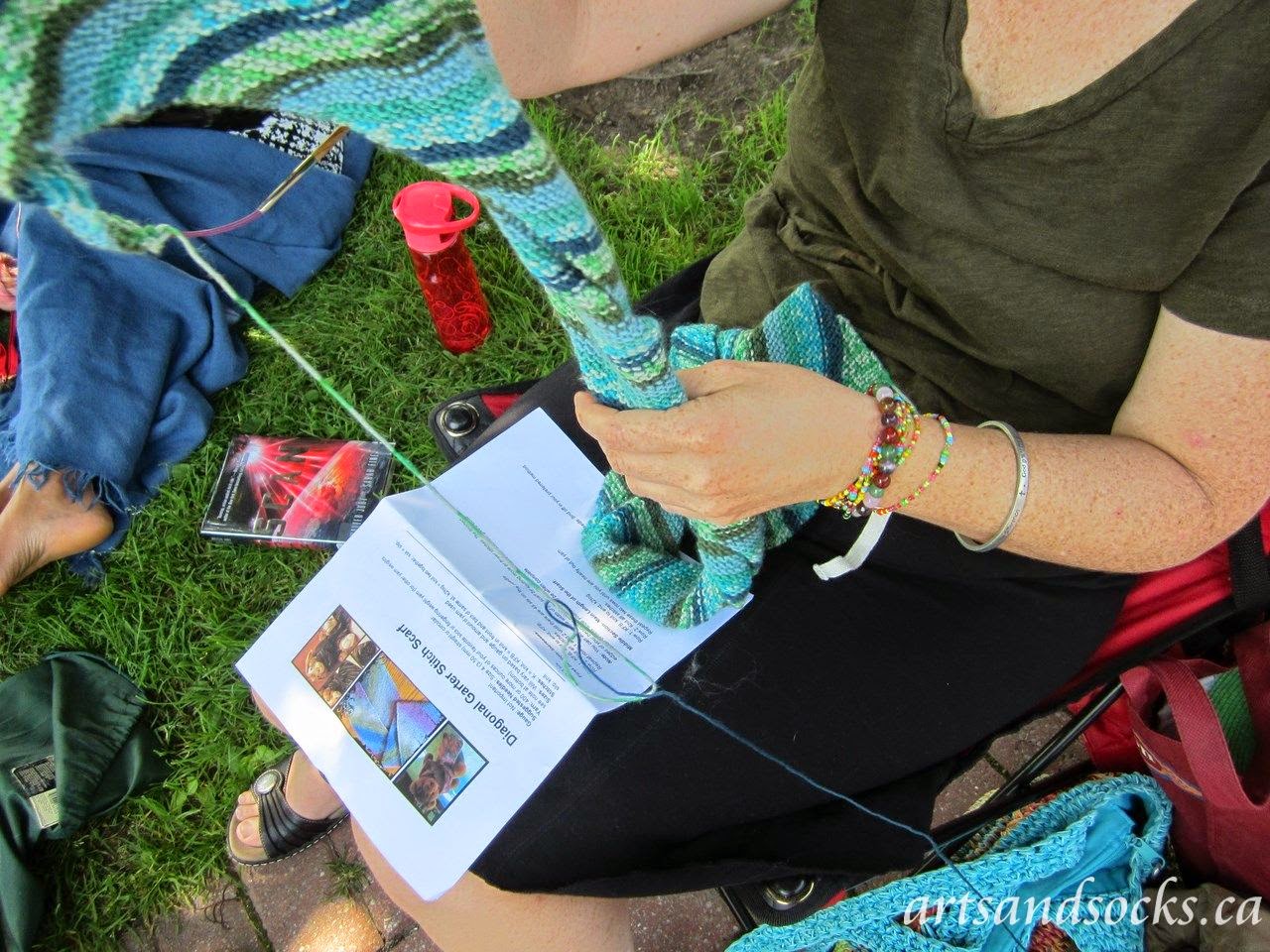 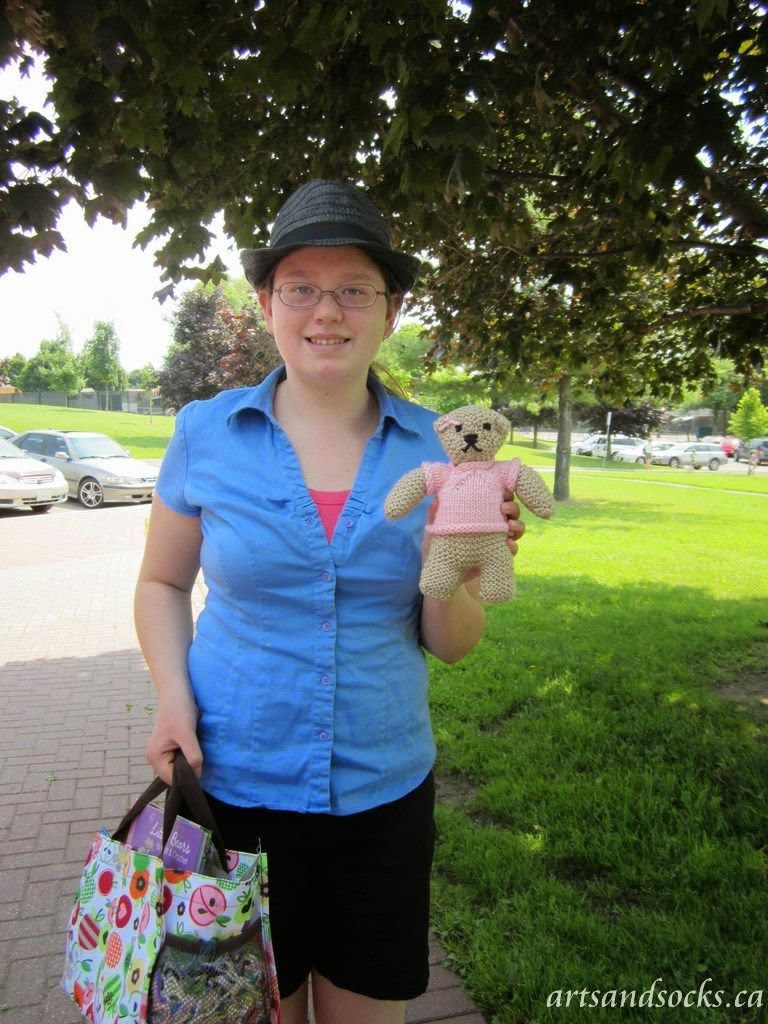 I got a picture of my "Birds of a Feather Shawl" being modeled by one of the librarians. 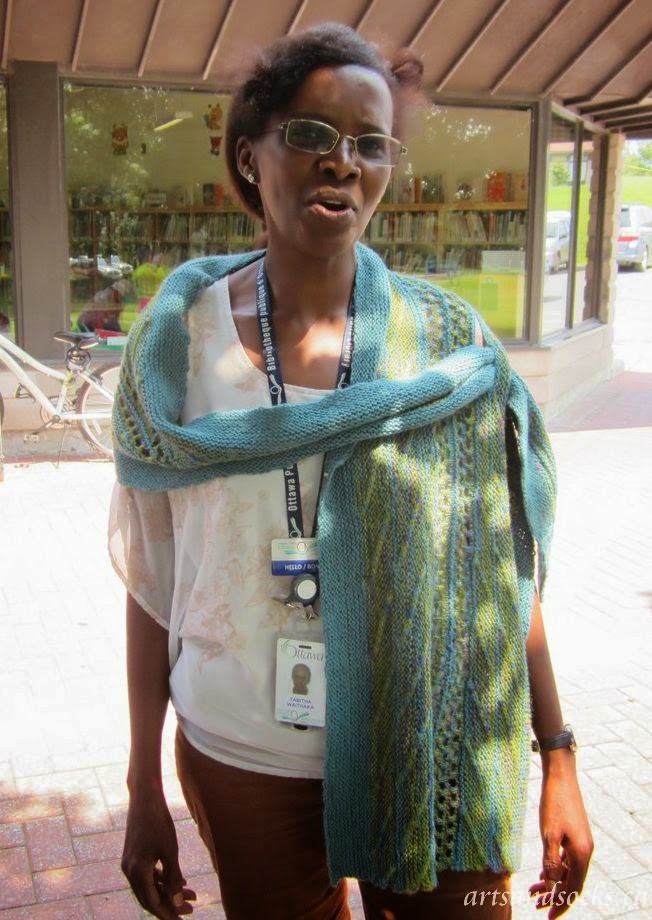 We had 2 knitters who had never tried it before. Both were excellent students.


All the knitters enjoyed the morning. I hope the library makes it a regular feature.

Thanks to Veena, staff member at the Hazeldean Branch, for organizing the event.
Posted by Kate at 1:04 PM 2 comments:

This has certainly been my year to make shawls. I have completed 4 shawls, since February. Two have been mystery patterns, one was glitzy and the latest has been a simple shoulder cover.

First, the simple one, that I finished on Monday. 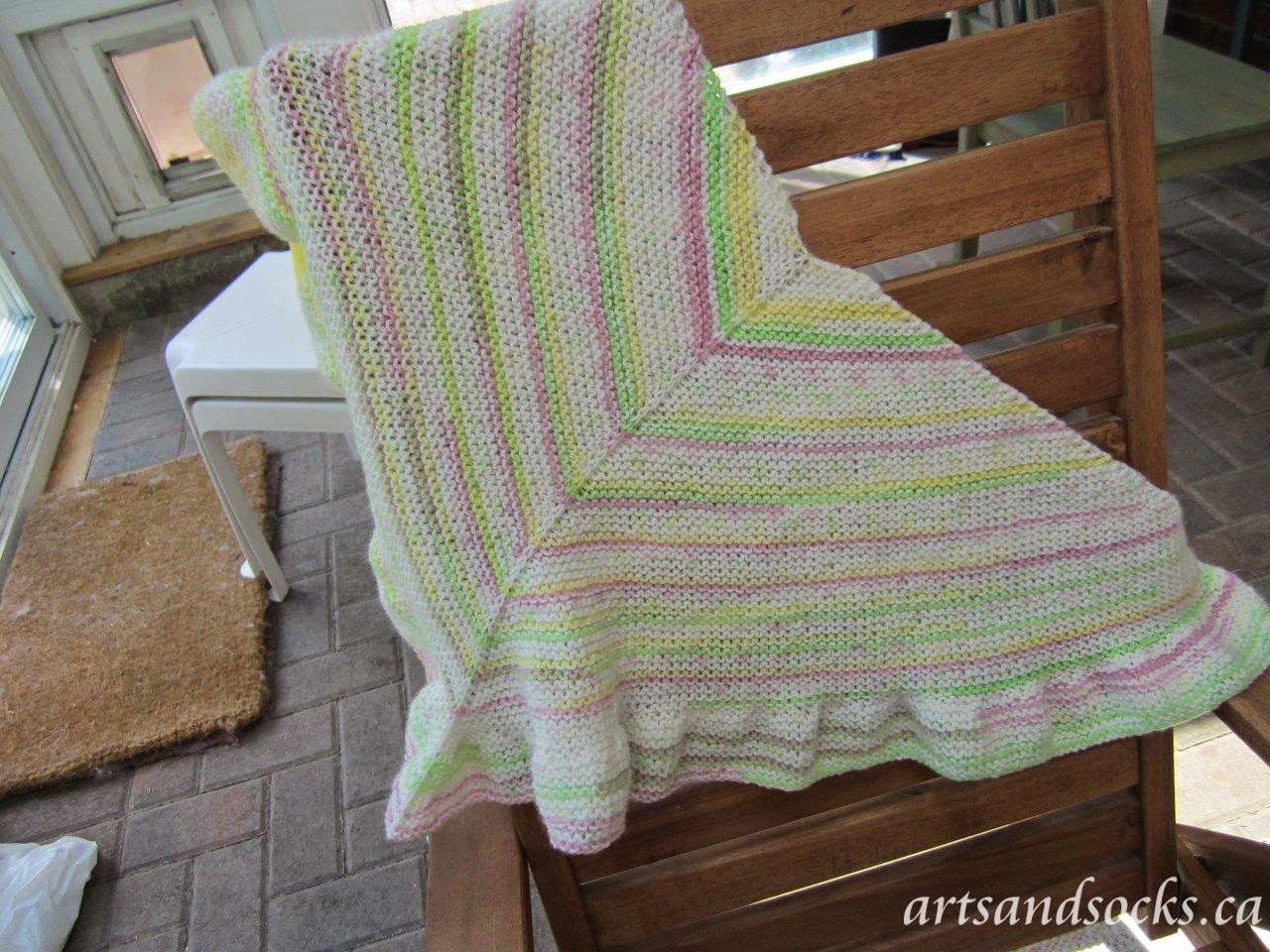 It is called the Yarn Crawl Shawl, and I knit it in Baby Jacquard yarn from Bernat. A simple knit that I think has a sort of Jane Austen look, with the ruffle around the bottom.

I also finished Birds of a Feather. This one caused me many problems. I think I knit the whole thing one and a half times, because I kept messing up. However, it is now finished, blocked and all the ends are woven in. 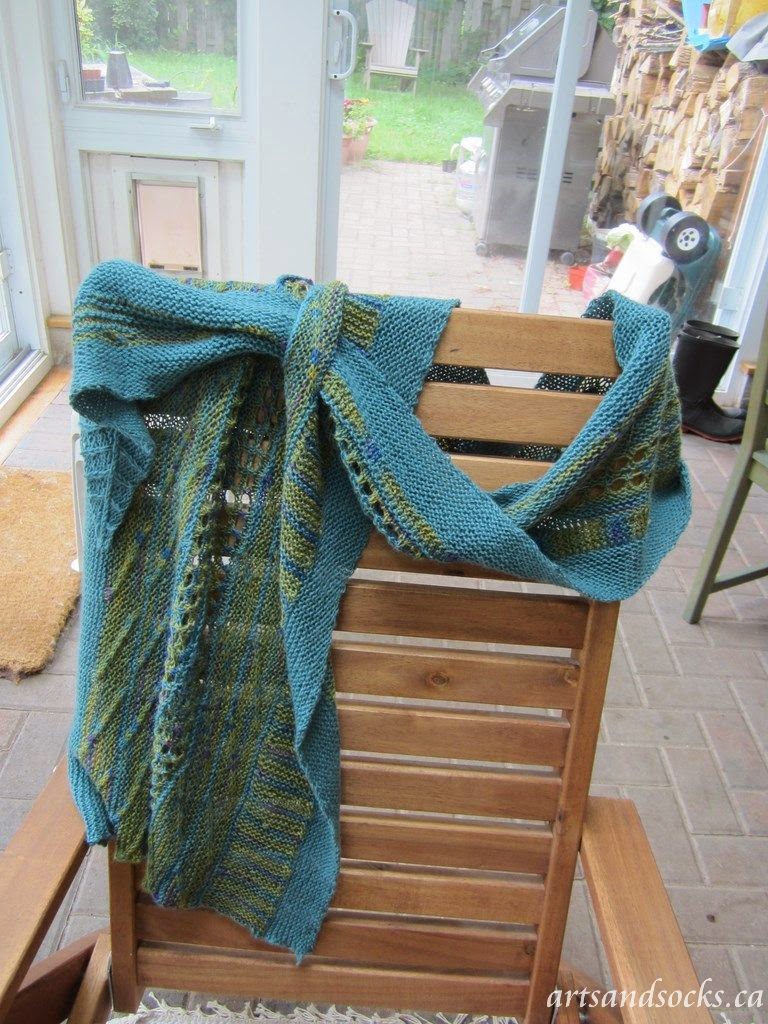 It is hard to get a picture of the whole shawl because it is about 8 ft. long. 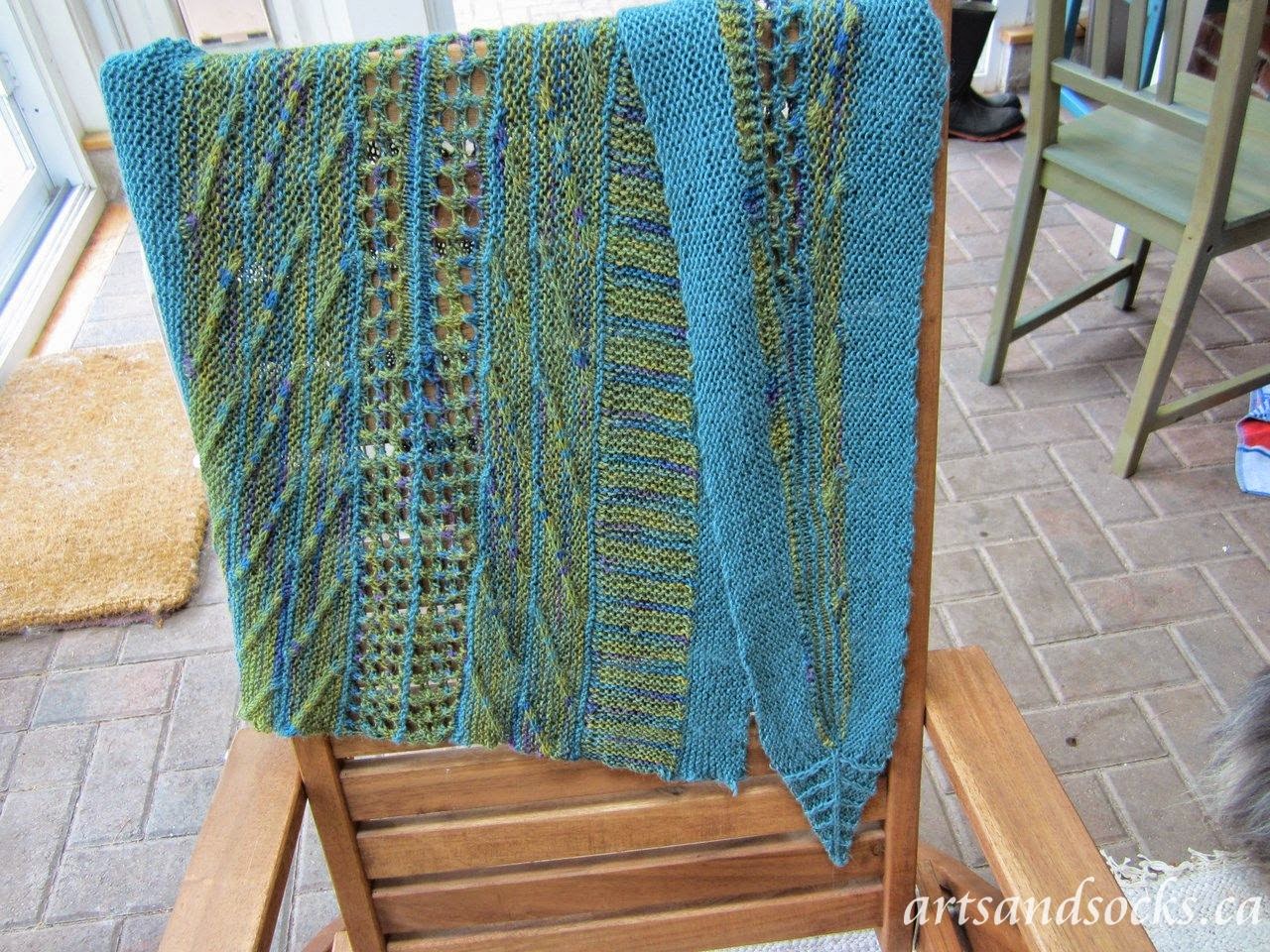 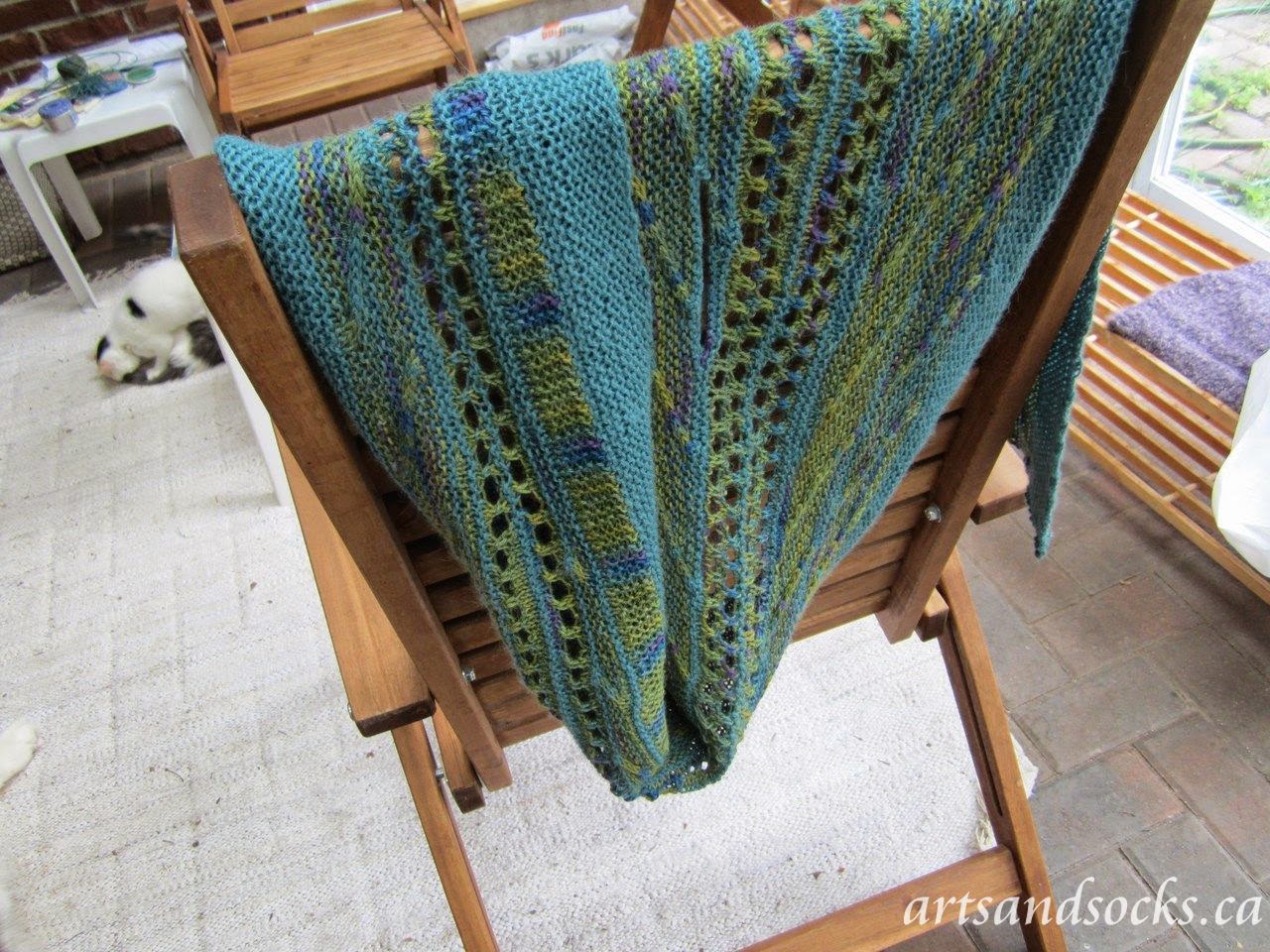 Note the kittens, wrestling in the top left of the second picture!

Here is a closeup of the pattern. 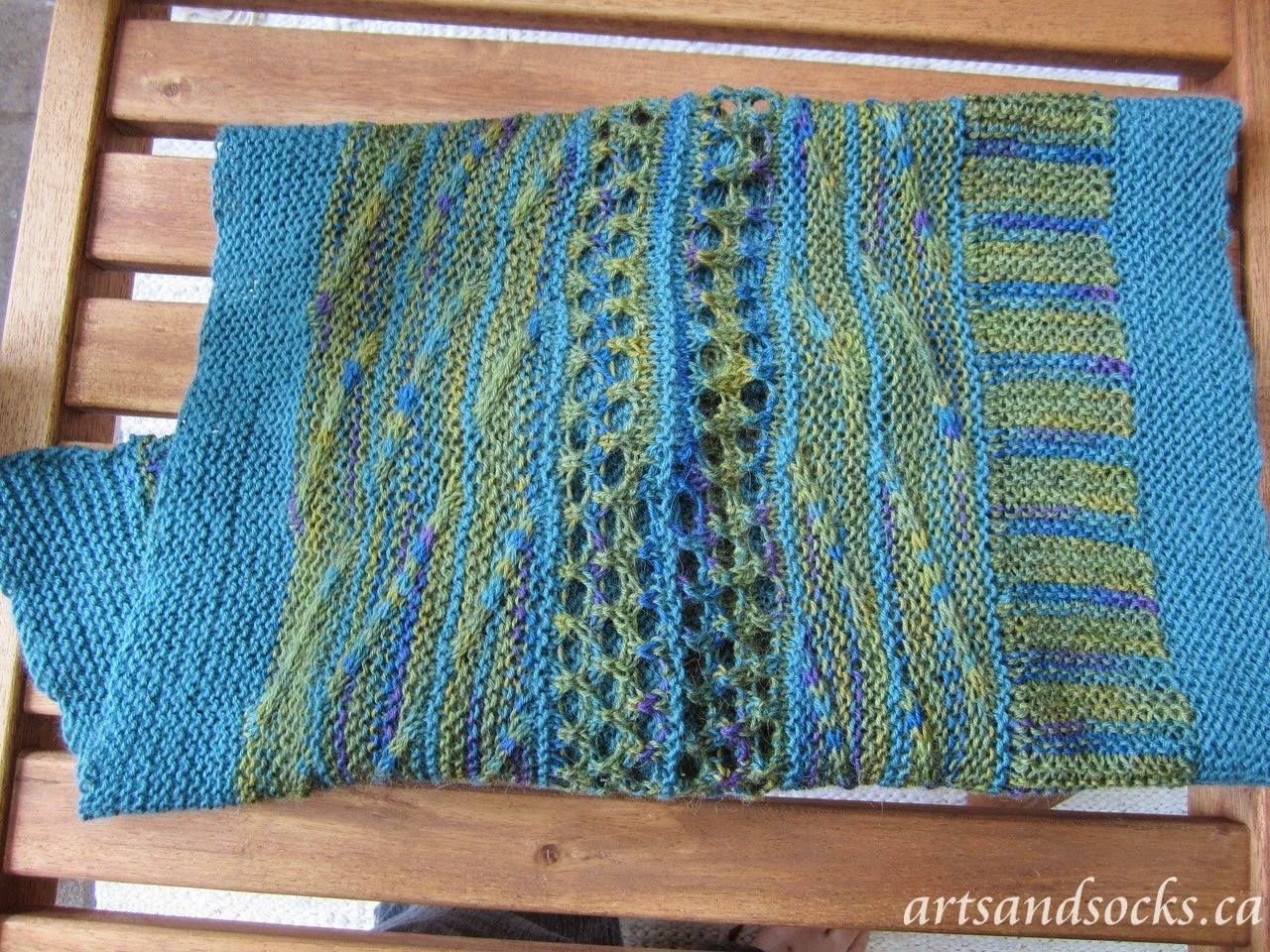 I chose to do the asymmetrical finish on the last section and the little bars of colour are kind of neat.

I am not sure where this one will end up. I think it will become a gift for someone.

One of my readers was asking why Dolly hasn't made an appearance lately, so here she is, with her fan club. 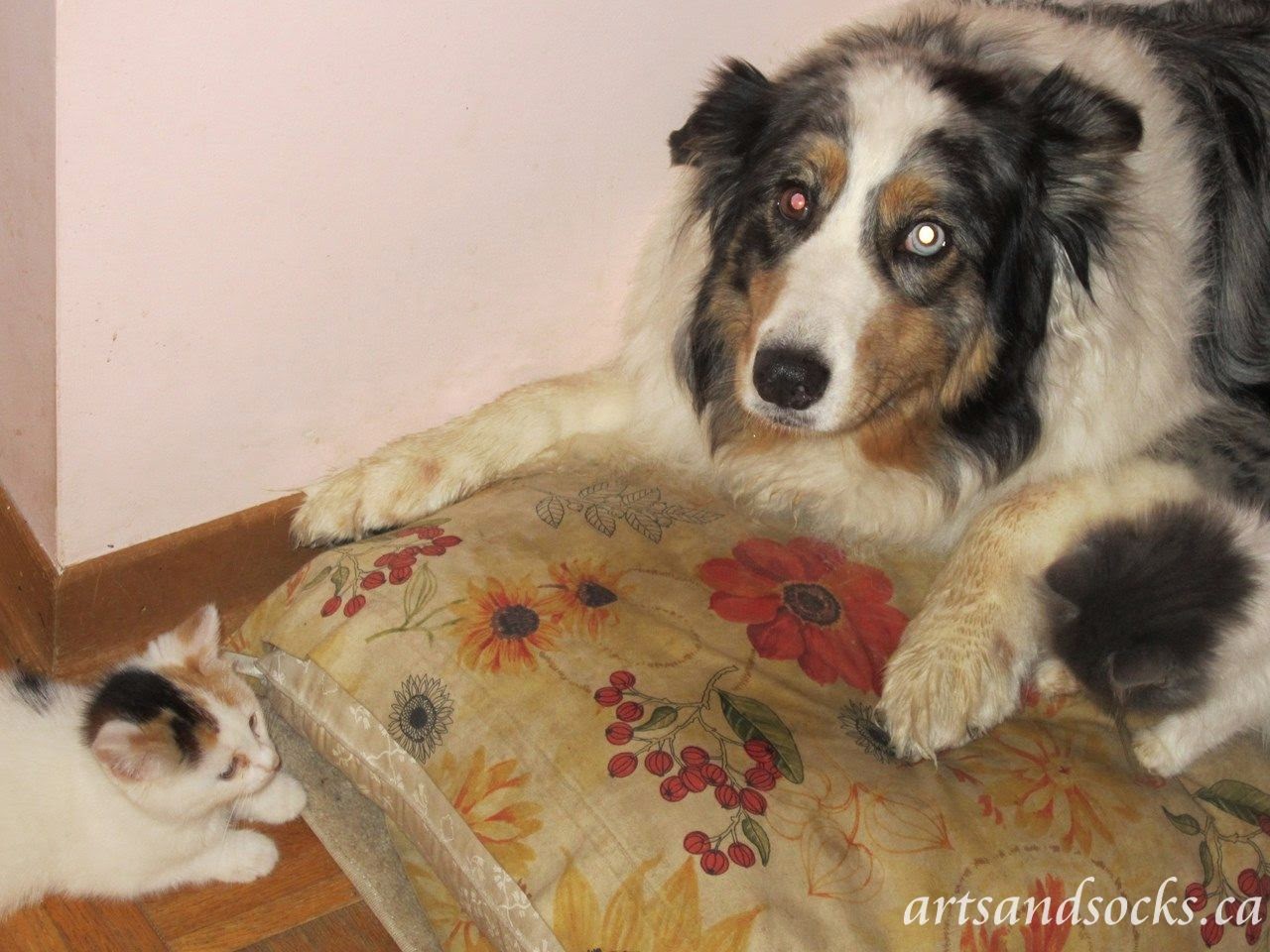 She is such a good girl, letting the little ones climb all over her. 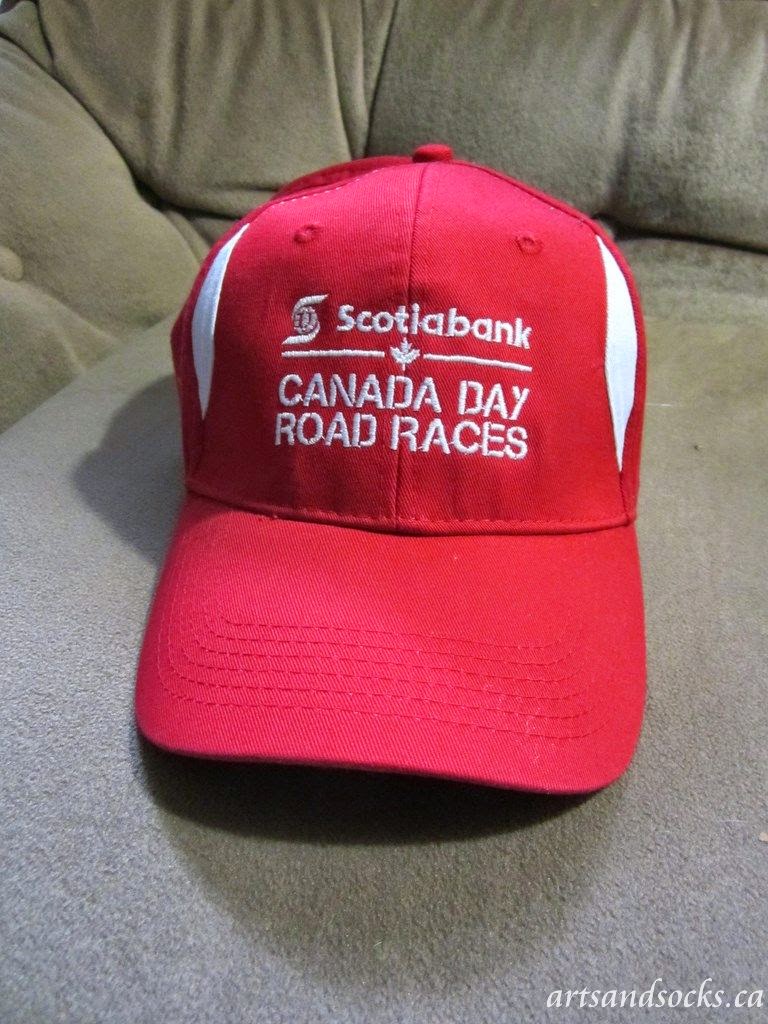 In the interest of full disclosure, I am not and have never been a runner. I was once a member of a corporate team in a fund raiser (because each team needed one female and there aren't many in the engineering departments) and I walked the whole 5 KM. I finished in 48 minutes, just 20 minutes behind my teammates!

There is a race day through my neighbourhood, every Canada Day and for about the last 6 years, I have volunteered as a marshal. Yesterday I was at about the 6.5 KM point of the 10 KM run. My job was to keep the runners on the course, and keep the drivers from driving into the runners. I was very elegantly attired in a high visibility safety vest, and Canada Day tshirt, shorts, and this lovely hat.

I realized that before the runners got to my post, passerby's must have done a bit of a double take. While I waited for the runners to arrive, I sat on a camp chair with my knitting. 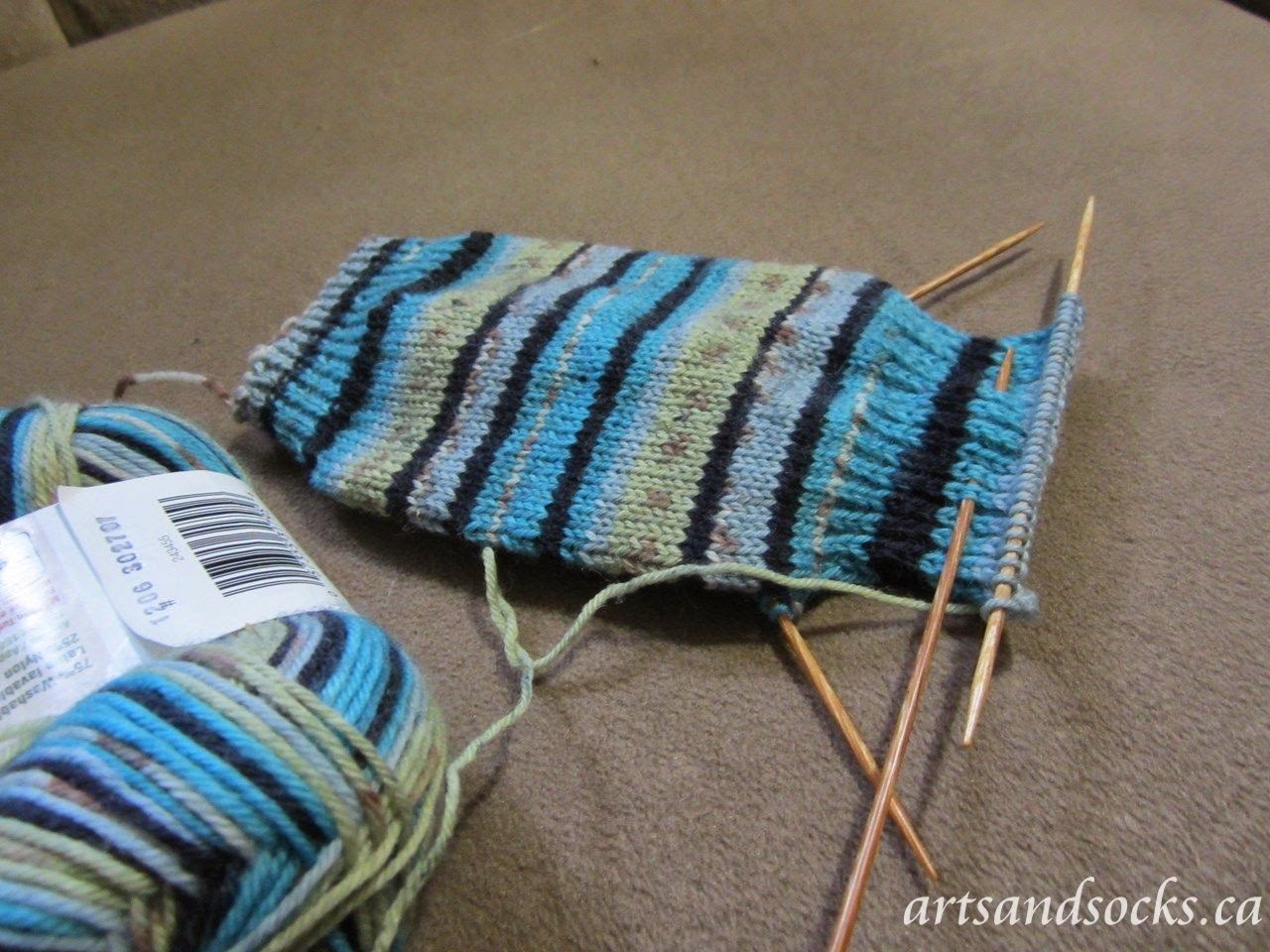 I didn't do all of this, yesterday. I finished the last couple of inches of the leg, and started on the heel. Next winter, I will remember sitting in 30C degree weather, working on this sock, as I stuff my feet into boots to face -30C.

My chuckle of the morning came when a runner, with an American accent, asked if it is always this hot on Canada Day. I told her, yes, this is pretty normal. I guess she thought that Canada would be cooler then where she was from, in July.