I've been doing some tidying this week, and realized that I hadn't yet posted this finish. 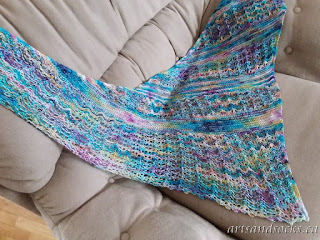 I finished this shawl in October, didn't get it blocked until December, and I am finally posting it, today.

This is Rødsildre by Melinda Measor. I knit it in yarn I bought at a yarn festival. You know, the skein that is really pretty but you have no idea what to do with it. You can check the details on my Ravelry page here.

Last week, my grandson brought me a piece of Duplo, and said "It's Nana." I fear he is right. 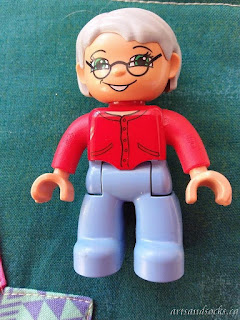 Glasses, grey hair, jeans. Yeap, that's his Nana. So I am changing my avatar everywhere to this. Because it is cute.
Posted by Kate at 2:47 PM 4 comments:

The weather has not been delightful. We have had cold, and snow and all those things that January is famous for here.

However, I stepped into the dining room yesterday, and saw this. 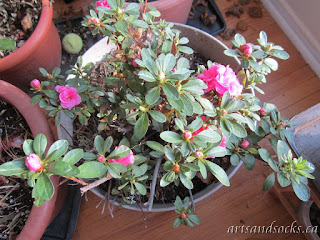 The azalea that I was sure had died, due to neglect, has surprised me with some pink blooms. Such a change from the cold and white.

Back in November, I saw a swap posted. I haven't participated in many swaps. The results are often highly variable.  However, I decided to join the Holiday Hangover Pouch Swap. Make a zippered pouch, add some goodies, meet a new friend, somewhere else.

I was matched with Stacey of Two Terriers Studio. I was a bit intimidated at first. Stacy has made samples for Mister Domestic! He designs his own fabric lines. However, I could tell from our early email chats that we had some things in common. Little did we expect how much we had in common.

I send Stacey this pouch. Because it was an international swap, I lined it with this. 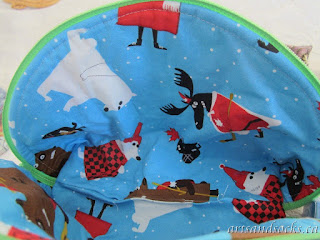 Stacey sent me this. 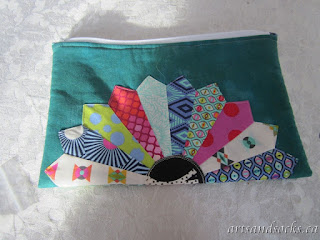 I sent her a lip balm key ring. 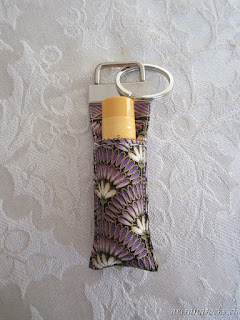 She sent me a key ring. 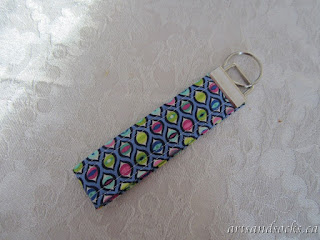 I sent a second zippered pouch, with cats on it. 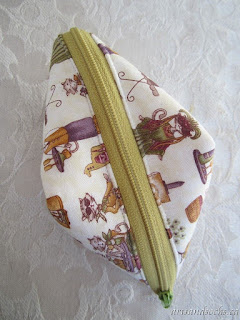 She sent a second zippered pouch with cats on it. 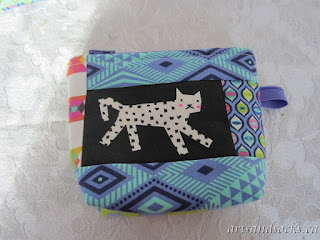 I sent a zipper pull. 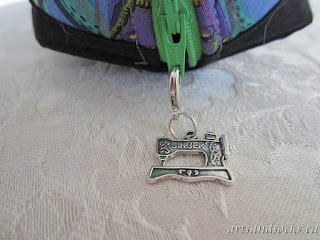 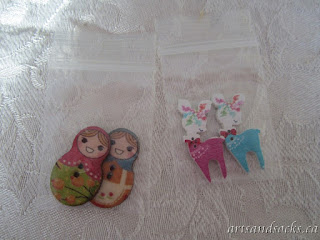 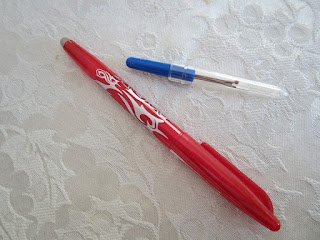 She sent a sewing notion. 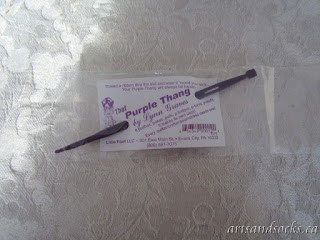 I sent chocolate for self care. (chocolate made by Syrian refugees in Antigonish, Nova Scotia) 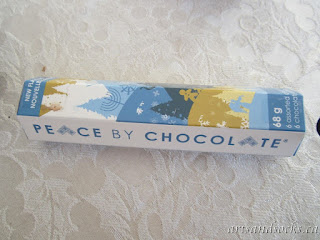 She sent skin products for self care. 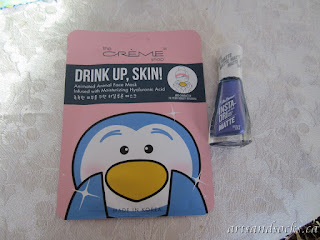 Google maps says we live 7 hours away, across an international border, from each other, but I can tell that Stacy is my new sew sister!

I've been doing some sewing, making a zippered pouch for a swap I participated in. I will show you my pouch and the one I received after my swap mate receives her parcel. However, I thought you might like to see my mailbox adventure, when I went to pick up my parcel from the swap.

We had 3 days or rain, freezing rain, snow, and frigid temperatures. This resulted in the door on my community mailbox freezing shut. When this happens, you can inform Canada Post, and they will send someone (eventually) or you can do a bit of DIY. 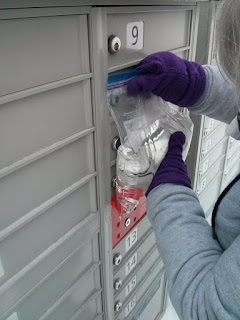 A zipper bag full of hot water, held to the door, will eventually thaw the ice, and allow the door to open. The ledges at the bottom of the doors on all the boxes had a buildup of ice. I will admit that after I got my door open, my neighbours were on their own. I also took a towel, and dried off the ledge and the door, so it wouldn't freeze again, after I closed it.

My friend Maggie reminded me that I haven't yet posted pictures of the fall retreat, so here are a few, from October. 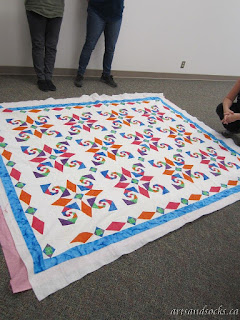 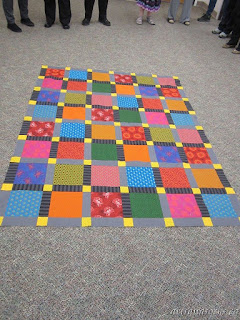 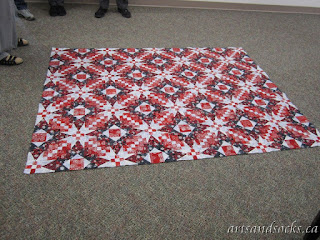 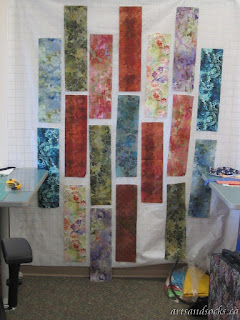 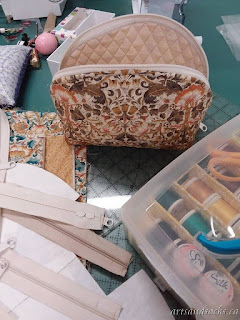 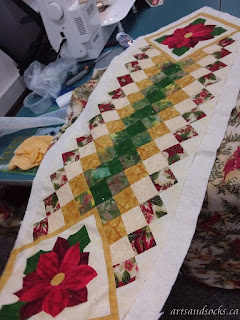 We had the biggest laugh of the weekend over this. 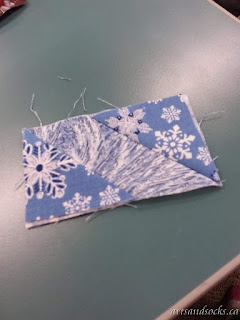 It was suppose to be a flying geese block, but the quilter didn't even notice that she had sewn the second piece on the wrong corner. We decided this "new" block she created was called Downward Goose. things get pretty silly by the end of a long day sewing.

In other news, after 9 months in our care, our foster cat, Mystique, has found her forever family, and gone to live with them. We are so happy for her, though we keep looking for her in the house.
Posted by Kate at 3:40 PM 4 comments:

Email ThisBlogThis!Share to TwitterShare to FacebookShare to Pinterest
Labels: retreat

Christmas and New Year have come and gone. Between family, and Cat Sitting for a friend, the time has flown. I did a tally of my completions but didn't manage to get it posted, so here it is.

In 2018, I only posted to the blog 35 times. I obviously need to work harder at that. I think I need to work on "building my brand" as well as trying to complete more projects. 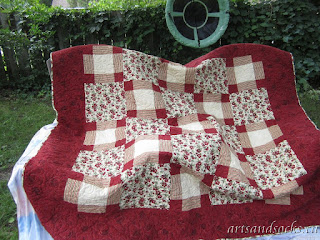 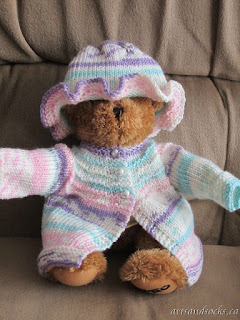 I have some projects that were started but not completed. I will be trying to finish those in the next while.

We only fostered 3 cats this year. Mystique became a longer stay client than we expected. I hope to have some news about her soon.

I signed up for the Bag of the Month Club, again, so look for more purses and bags. I have an art quilt I am going to be working on. Hopefully, my concept will translate into reality. I will continue to knit everyday. It is good for my soul.