The Day The Technology Died

Did you ever have one of those days, when you are convinced some outside force is causing chaos in your world? That was Wednesday.

I started off, trying to return something I had purchased online. No problem, I had checked before I placed my order and found that they had free returns. They sent me a return postage label, all I needed to do was print it out. The printer decided to not print the bar code on the label completely. I used the function that is suppose to clean the print heads, and it stopped printed black ink altogether.

Okay, on to the next job. I was setting up a new computer for one of my computer clients. The computer decided to get itself stuck in an endless loop of trying to install software and failing.

My sweetie, meanwhile, tried to get the old laser printer we have working, except both of the older computers that might be able to drive it wouldn't boot.

In the midst of all this, the router for the house wifi lost its mind, and we no longer had wifi.

By this point, I was ready to embrace a simpler life, and move off the grid! However, since that wasn't an immediate option, we started solving the problems, one by one. By the end of the day, we had  wifi with a temporary fix, and I had a solution for the new computer. I decided a new printer might be in order.

Yesterday, I did a curbside pick up of a budget printer (chosen mostly because they had it in stock). My sweetie continues to tinker with the non-functional printer. If he can't get it working again, I'll look for a similar one to replace it. (The bargain printer doesn't photocopy.)

Humourously, I started a slow stitching project, at the beginning of June. It kind of fits the off the grid sentiment, except that the pattern arrives weekly, by email, and I have to print one page, to do the block of the week. So, I started this week's block, today, four days later than usual.

It is called the Summer Reading Stitching Club, and it is from Mollie of Wild Olive.

The first block celebrates Wind in the Willows. 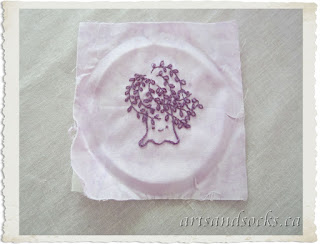 The second block represents Roll of Thunder, Hear My Cry. This is a popular children's book in the US but I am not familiar with it. I have it reserved from the library. 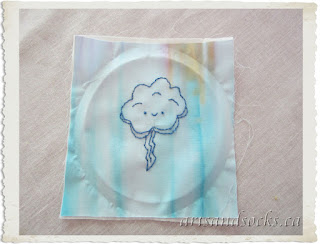 The third block, that I just started, is Alice in Wonderland. 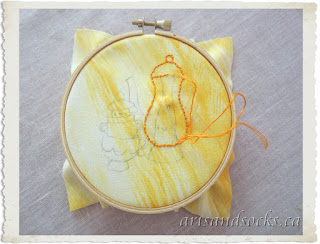 I am having fun, using stash fabrics and flosses that I already owned. The pattern suggested black floss for all, but I am having fun with the colours.

The blocks will be hand pieced using English Paper Piecing, after a press, to get the hoop mark out.  I figured I might as well pull out all my skills I haven't used in awhile. Handwork seems to suit hot weather, and we are back to hot weather, again.

Mask Making and Other Entertainment

As I have said before, I don't enjoy mask making. So I have been trying to balance the mask making with some other more entertaining activities. I finished five masks this week from the "Valami" pattern,

Bear isn't sure he enjoys masks, either. 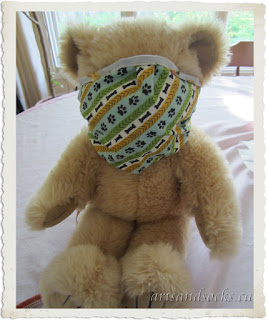 He says he can't see.  He would like to go back to modelling baby sweaters, please.

No elastics on these masks, Just ties, that don't get in the way of glasses or hearing aids. 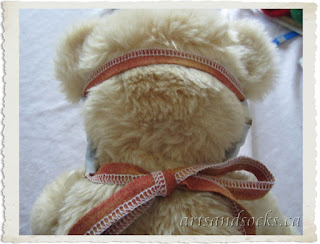 This also allows an easier removal, without touching the mask.

As a change from the masks, I have been doing some paper piecing. The first section is finished. Now that I have it figured out, I hope the rest will go faster. 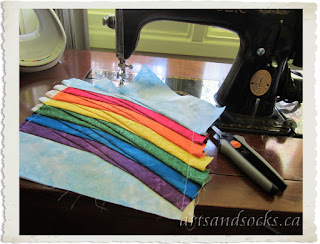 I have been doing this on my vintage Singer machine. I like how it is coming.

I have also started an embroidery and EPP project, hopefully I'll have some of it to show, next time.