I seemed to have disappeared for a month. I got the great 2018 infection, which had me doing nothing for 3 weeks. Breathing, drinking tea, that was about it. I was so sick, I didn't knit for 3 weeks. It was weird. I am just finishing my antibiotics and hopefully, it will just be steady improvement from here.

I have a couple of Holy Week traditions. One comes from a happy accident. In April 1980, we flew from Montreal to London, planning to spend a week exploring the city before we left on a bus tour of  England and Scotland. Since neither of us had ever traveled outside of Canada as adults, it seemed like a good idea.

We went one evening to see if we could get cheap tickets to see Jesus Christ Superstar. We got in line at the theatre, to buy tickets and suddenly they were shouting "Two, anybody want 2?" I threw my hand up and we found ourselves with balcony seats for practically nothing, for a show that started in 5 minutes! I don't know if you can still do that but it turned into the highlight of the trip. The kids from the colonies were just blown away by the production. It was a Wednesday night, I think, so we probably had all the understudies and second string cast, but it was like nothing we had ever seen.

So, in honour of that occasion, I am playing the London cast album, and do, every Good Friday. My kids might well be doing the same with no idea why.

The other tradition, that my kids probably also do, is cut a branch of Forsythia on Palm Sunday. It looks like a dead branch, sitting in a vase. 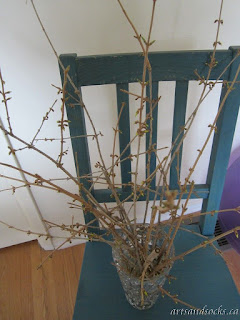 It is a sign of hope, and faith, because, today, you see this, 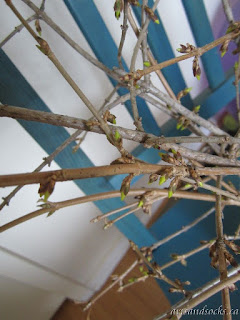 A tiny bit of yellow on the branches, the little brown buds have a secret hiding in them. With luck, on Sunday, we will have flowers.

I received a gift, for Easter. 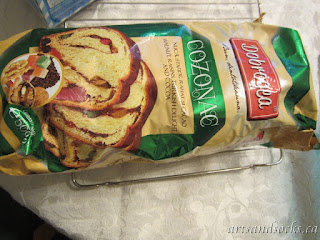 It is Romanian Easter bread. We are looking forward to trying it with our coffee, Easter morning.

Email ThisBlogThis!Share to TwitterShare to FacebookShare to Pinterest
Labels: Flowers

March is a fickle month. Last Thursday, it was warm and sunny. My grandson and I went for a long walk, enjoying the sunshine and the clear sidewalks. On Friday, we were to get snow. However, the snow missed us entirely. Today, we were suppose to get just a small dusting of snow. However, it has been snowing since before I got up. 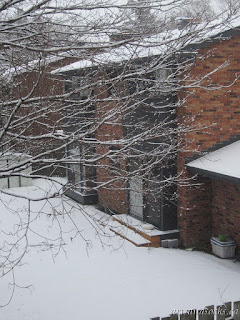 March is a month for Pussywillows, and that is what the tree outside the window looked like, catkins out at the ends of the branches. This would be fine, except the tree is a maple. 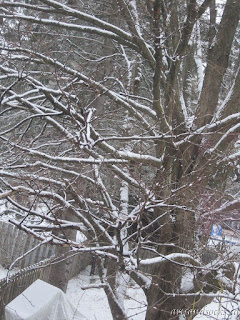 I need to work on my machine embroidery and thread painting skills, because I can imagine this as a small wall hanging, after I simplify the photo.

I finished two of my three baby sweaters. 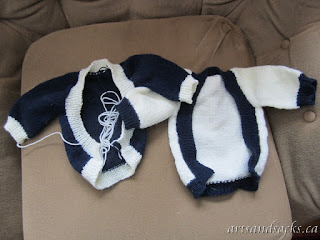 The navy one still needs its ends sewn in and they both need a wash to get the pet hair off them. 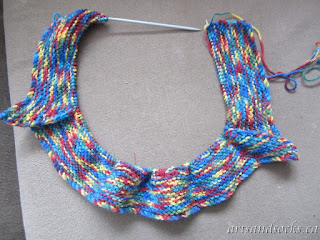 My eyes need colour, so this is a Baby Surprise Jacket, in crayon colours. I have some crayon buttons to go with it. This will be my fifth one of these. They are quick and easy, and travel to waiting rooms well.

I thought I would sneak in a picture of my two new additions, living with us, for now. 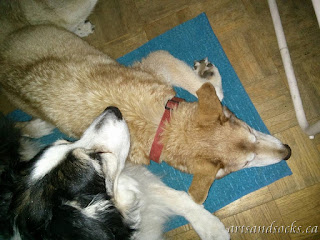 They look so cute when they are sleeping!
Posted by Kate at 12:11 PM 3 comments: