With a new baby in the family, I have spent a lot of time this week, running errands for the new parents. This has limited my artistic time. However, I did get a couple of non-baby projects done. Christmas is coming! 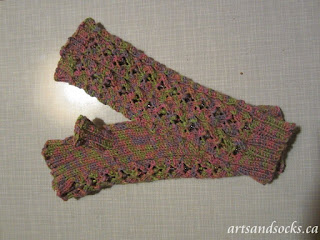 I finished a pair of lace fingerless mitts. This was the first time I have done an afterthought thumb. I had a little problem because all the tutorials on line assumed that the thumb was in stocking stitch, and this one is ribbing. I am not sure I got it right, but done is better than perfect! The yarn is a bamboo nylon blend so it doesn't block very well. However, I expect they will block with wearing. 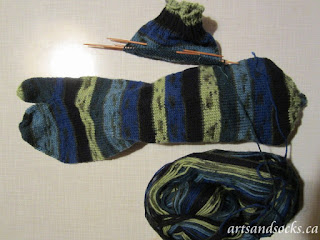 In the silly department, this is a sock with a flip flop toe, for someone who wears flip flops all year round. Since the first sock used about 48 gm of the ball, I am not even bothering to try to make the second one match. I fear I won't have enough yarn, if I match the stripes.

Tomorrow, I am teaching the church ladies how to make a Granny Square block. I wrote a tutorial here, but I left out one picture.

So here is the missing picture. 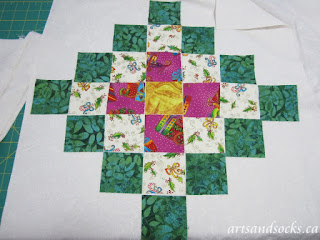 Now, I just need to turn my first attempt into a pdf file for them. I cut 27- 2.5" wof stripes, that need to be turned into 3.5" lengths so that all the blocks have the same outside fabric. It reminds me of why I don't do quilts that start "make 95 half square triangles."

Once upon a time, there was a little boy that I used to go on adventures with.

Our adventures were to the pool, to the shopping mall, to the farm to see the animals. Later, our adventures included camping trips, ghost walks, and geocaching. In time, we added university student and parent orientation, getting a driver's license, and stupid little things like trips to Costco to to taste the samples. He was much braver then I was, because I never try the Costco samples.

A few years ago, a beautiful princess came into my little boy's life, and soon, she got to go on the adventures, instead of me. Of course, just to drive the little boy crazy, sometimes I take the princess on adventures, and he isn't welcome. We call it "Girl's Night".

Today, a new adventure began for all of us. The little boy and his princess now have a little boy of their own.

I spent all day yesterday and half of today waiting for word that he had arrived. While I was waiting I do what I always do when I have to wait: I knit. Since my little boy was a big fan of Pokemon, when it first came out, I decided that he needed to have his very own pocket monster. So I made a Pikachu baby hat. 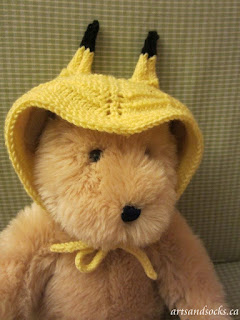 Welcome to the world "Jett". Your Nana has been waiting for you. I have some excellent adventures planned for us.
Posted by Kate at 8:51 PM 9 comments:

Monday, I threaded my serger, cut some flannel and made 6 large receiving blankets. I used  my serger all the time when I was doing more garment sewing, but I don't find it very useful in bag making. Luckily, somethings stick in the brain, so I had no problem figuring out how I wanted to do these. 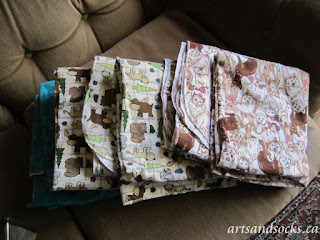 I round the corners on my receiving blankets because I don't have to stop as I go around the edge. I also find that they always fray at the corners first, so the rounded corners prevent that, too.

The observant might have realized the picture only shows 5 blankets. The sixth one is here. 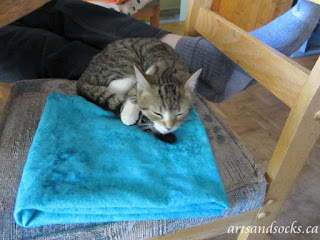 It has already been tested for softness. 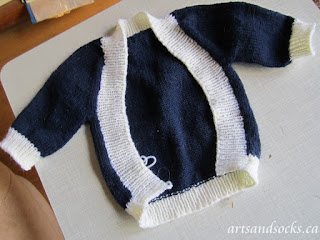 I made a Newborn Vertebrae sweater from some Sirdar Snuggle. It still needs a couple of ends woven in, but it looks very good. It is a fast and easy pattern for a new baby.

This morning, they replaced the locks on our community mail boxes. The original locks were susceptible to freezing last winter, so they are testing a new design. 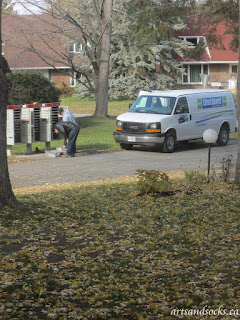 It is a big job, but fortunately we provided a couple of volunteer supervisors. 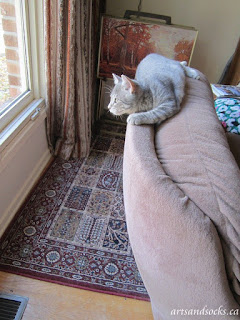 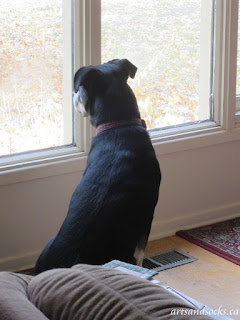 You are welcome, Canada Post.
Posted by Kate at 1:19 PM 9 comments:

For the Kitten Fans

As I am sure I have mentioned, here at Arts and Socks, we run a Resort and Spa for under weight and sick kittens (and adults, too). We are currently fostering our 166, 167. 168, and 169th fosters. Since we have 4, I haven't managed to get a picture of all four, so here are a couple of shots from this week. 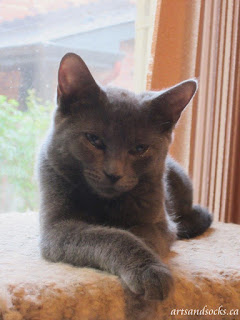 It's hard to get a picture of an all grey kitten.

Tabbies are much easier. 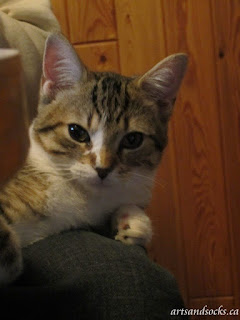 You can tell the weather was really dull this week. Such is November.

Meanwhile, my friend Cheryl, another cat lover, has created a calendar for 2017, The Year of the Cat.

Here is a taste. 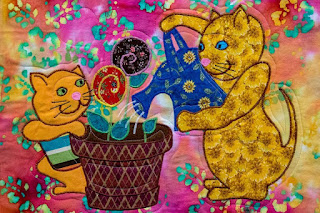 The proceeds from her calendar are going to the Lyndhurst Feral Cat Project. Don't you need one of these lovely calendars?

If you hop over here, you can see all the pictures and find out how you can order your own calendar.

Email ThisBlogThis!Share to TwitterShare to FacebookShare to Pinterest
Labels: Cats

What I Did on My Vacation

As I noted in my previous post, the weather on Retreat weekend was cold and grey. I realized on Sunday morning that I had no idea what the view was from my room, because it was always dark when I was in there. I popped back after breakfast to get my weekend bag, and took this picture. 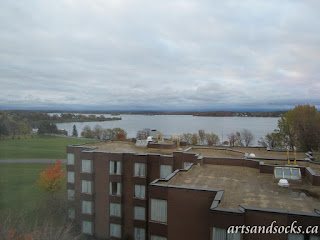 I had a view of the St. Lawrence River, and this was the first I saw it. Of course, sewing until 10:30 at night might have had something to do with it.

I made a QUILT! I started Friday afternoon with flat fabric, and had it pieced, quilted and bound on the front side by Saturday night. 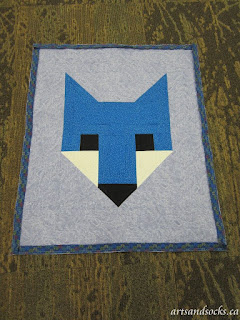 I sent this picture to my husband, and he had the idea that it was about 16" across. 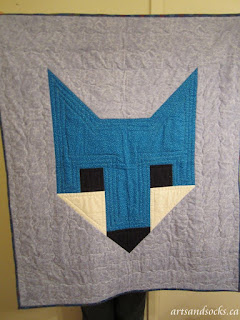 Surprise, it is actually 30" by 36".  The pattern is Fancy Fox II by Elizabeth Hartman, and this is her gigantic block. All the fabric is from my stash. A visitor to our quilting room, from another quilt retreat told me the quilting was beautiful. Thank you. I was kind of stuck on my mistakes.

I also made a clutch to match last week's diaper bag. 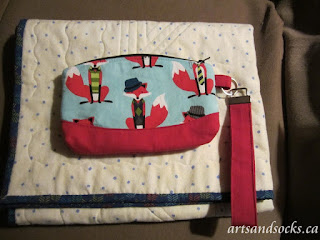 It is Clematis by Blue Calla and is a free pattern. It is laying on the back side of the quilt.

I also made 3 bandanna bibs, from my scraps. 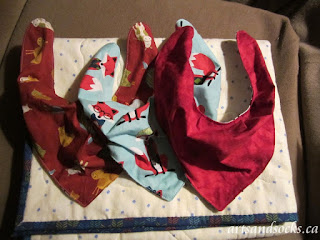 They still need snaps at the neck.
Posted by Kate at 4:50 PM 8 comments:

Why on earth would 11 normally sane women to pack up half their sewing rooms, fill bags, bins and rolly cases, and travel 170 km, to send the weekend together/ It's Quilt Retreat!

Look at all the lovely things that were accomplished. 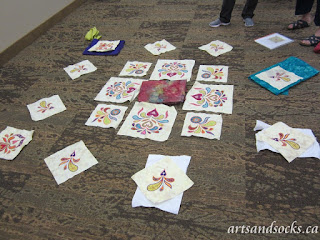 Joanne was working on an embroidered applique design. 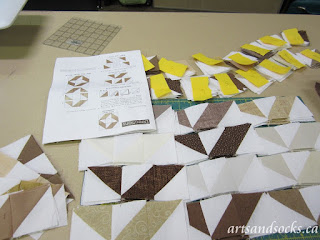 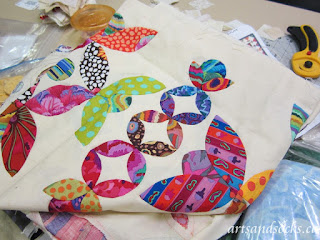 In case she ran out of triangles to piece she also had some applique blocks to put together. 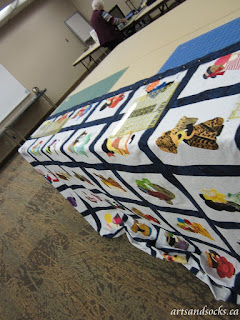 This looks a bit odd. Doreen was putting together her International Sunbonnet Sue. 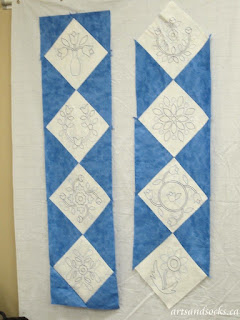 She also had some embroidery she was putting together. 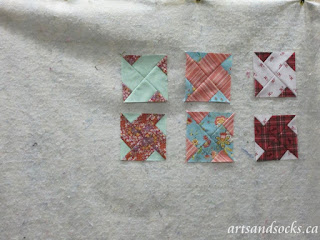 Margaret was working on these blocks. I think it's a scrap buster. The block at the lower right has Scottie Dogs on it. 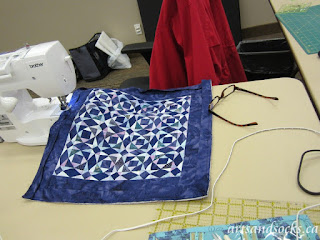 Our organizer was making a Storm at Sea miniature. 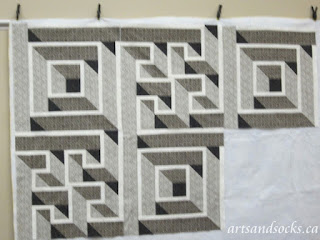 Diana was hard at work on this interesting piece. 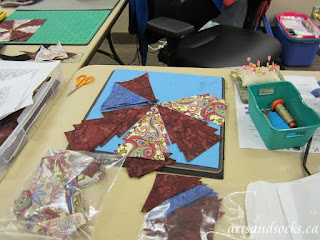 Pat was assembling these blocks.

Lots of inspiration, lots of laughs.  I seemed to have missed pictures of Lynn's and Joan's work. You will have to trust me that it was beautiful. The weather was cold, wet, snowing (we got 5 cm of snow), generally miserable, an excellent excuse for a weekend of uninterrupted sewing.