Yesterday, I took a little day trip to Almonte, ON. Almonte is a lovely little town with an artistic vibe.

I arrived home with some Fair Trade coffee, some strawberries, and some FABRIC! 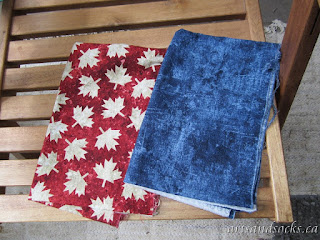 I bought this, plus some beige to make a companion piece to the New Brunswick piece, that I made last summer. 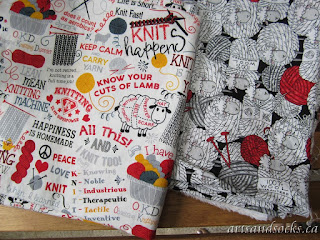 Knitting fabric! How could I not buy a metre of each, to make knitting bags? I love both fabrics, they both make me smile. 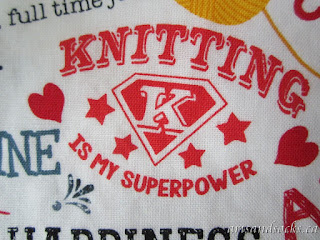 I have actually been doing pretty well at shopping my stash. I have been keeping track of fabric in and out and I think I am currently 1.5 m over what I have used since I started tracking. With luck I will be even by next week.

Email ThisBlogThis!Share to TwitterShare to FacebookShare to Pinterest
Labels: fabric

My grandson is getting so grown up. I was informed recently that he only had one sunhat that fit. Could Nana help? Of course!

I had seen a free pattern on the Oliver + S website. It looked perfect.

I checked my stash for suitable fabric, and found some good stuff.

First up, I have been calling this the Old Guy Fishing Hat. 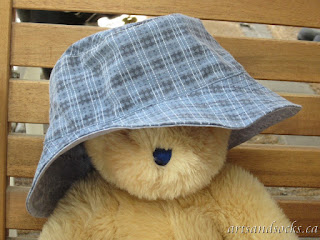 Bear says it is a good fit!

The fabric is from my vintage collection. It is left over from a pair of shorts, I made for his uncle, probably 20 years ago. 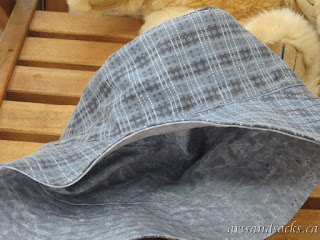 The lining is a grey, that I have used as a purse lining. 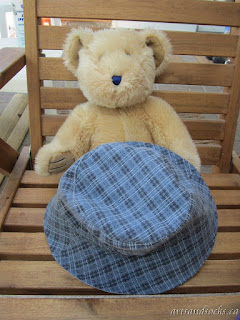 I thought this could be his "dressy" sunhat.

The second hat is made from a couple of fat quarters, of unknown origin. 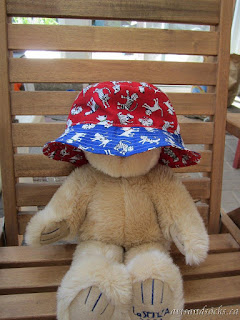 Hey Bear, where is your face? 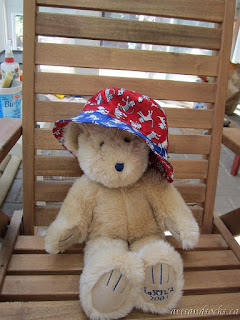 That's better. I made this one reversible. 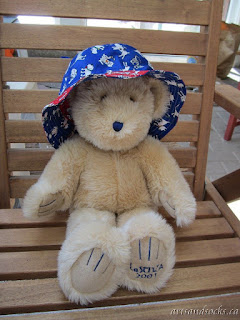 The fabric has dogs and cats on it. This one is for everyday, play wear. I followed the directions for the first one, and decided that I would employ some of my bag making skills on this one, so I left an opening in the seam for the cap part, and turned it through the hole, then hand stitched the seam after I turned the hat around. Much easier than hand stitching the entire cap lining to the brim.

Another couple of pictures, that I haven't posted. 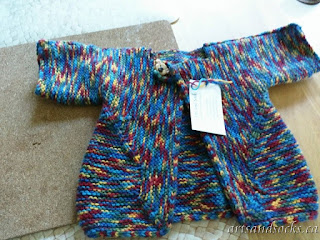 This is number three from my winter baby sweater knitting. This one is off to California, on Friday. It has on of Cheryl Coville's handmade buttons.

On Knit In Public Day, I got to teach an interested 5 year old how to finger knit. Nevr miss an opportunity to teach the new generation to knit. 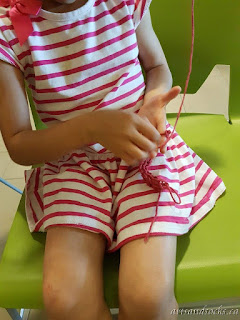 She learned fast. We even found some yarn that matched her dress.

I have been absent here. I was a Supervising DRO in the recent provincial election. Although I love working at elections, I found the the new technology took as much time as the old paper process. for the supervisor. We still had to pick everything up and take everything back, and they added 6 computers, a printer and a modem to the load.

I did my job, people were able to vote (1600 at my polling place) and the results were reported much quicker than ever before. Of course, after 15 hours of work, I really didn't care who won.

Meanwhile, I did get a chance to take a couple of garden pictures. 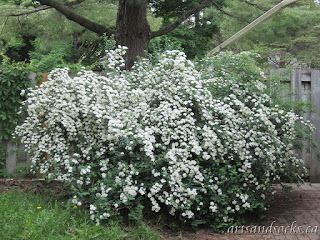 My wedding pictures were taken between two old Bridal Wreath Spirea, in full bloom. I have my own now and it flowered for my anniversary, yet again! 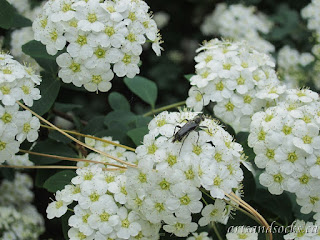 I found this guy, enjoying it, too. 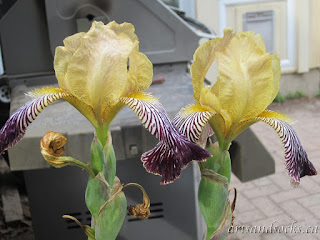 My iris are in full bloom. These are in a pot beside the barbeque. Not  sure how they got there, but they are pretty.

This week, I had the great honour of standing in as family for a dear friend who received her Ph.D. from the University of Ottawa. 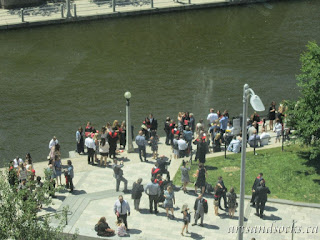 It was a beautiful day. This was the view of the Rideau Canal from the fourth floor window of the Shaw Centre, where convocation was held.

I got the opportunity to meet Spirit Bear. 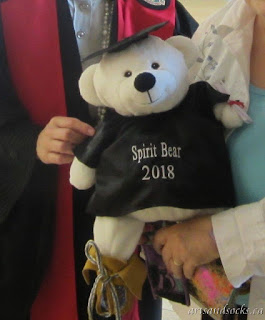 He was there to cheer on his friend Dr. Cindy Blackstock , as she received an Honorary Doctorate of Law.

Of course, the highlight of that day was watching my friend receive her degree. 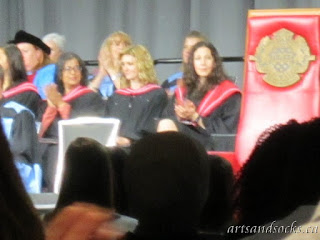 Here are the brand new Docorates, taking their place with the other honoured guests on the stage. Sorry, I had all the undergrads in front of me, so I overzoomed to get the picture. I love their new superhero capes! Wonder Women, all.