Another year over...and what have you done?

As the weeks fly by, I become convinced that I am not getting anything accomplished. so I decided to do a brief tally.

From Zippy to Gaston, there have been 21 foster cats.


Doug the dog, chose us as his forever family. 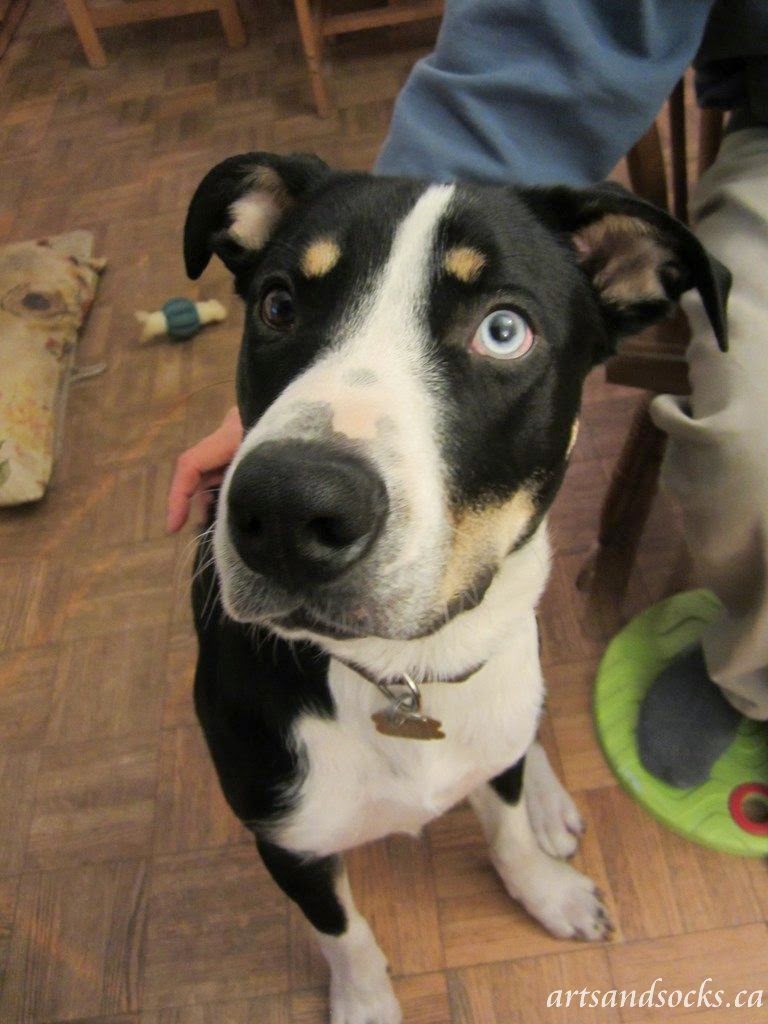 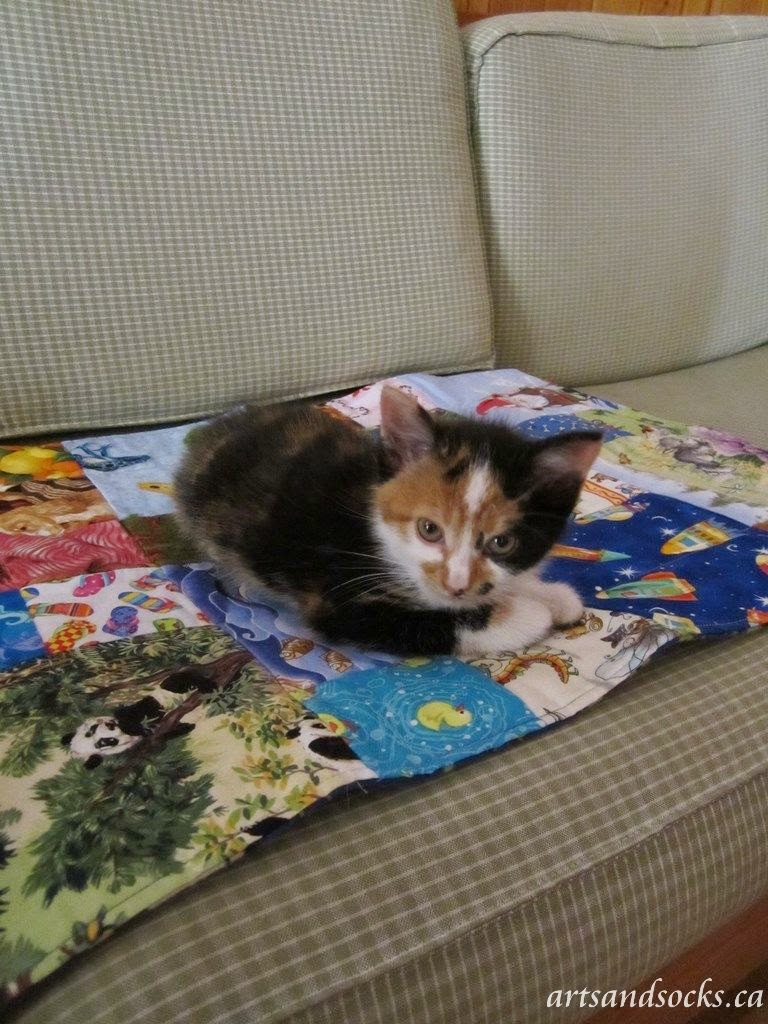 Okay, I guess that is not a bad amount of work for one year. I will try not to look too hard at my ufo pile.

The New Year's Celebrations will be starting soon.  The fire is lit, and we have something bubbly to drink and a can of cashews. Let the party begin!

I Got It Finished!

The Advent Lace Scarf was finished before Christmas, blocked wrapped, and under the tree. No need for IOU or wrapping the yarn and needles. (My kids used to hate getting those.) 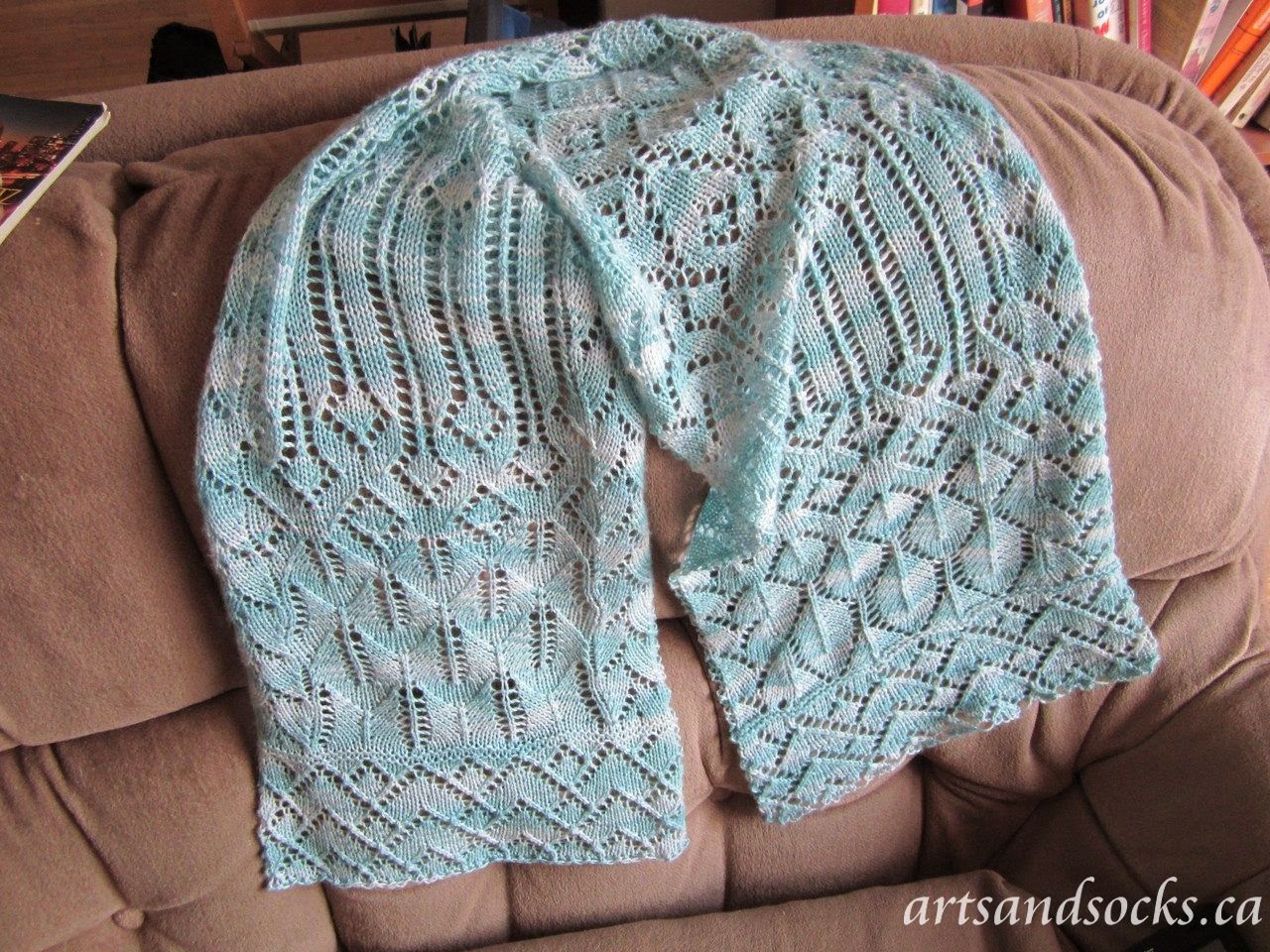 She wore it home! 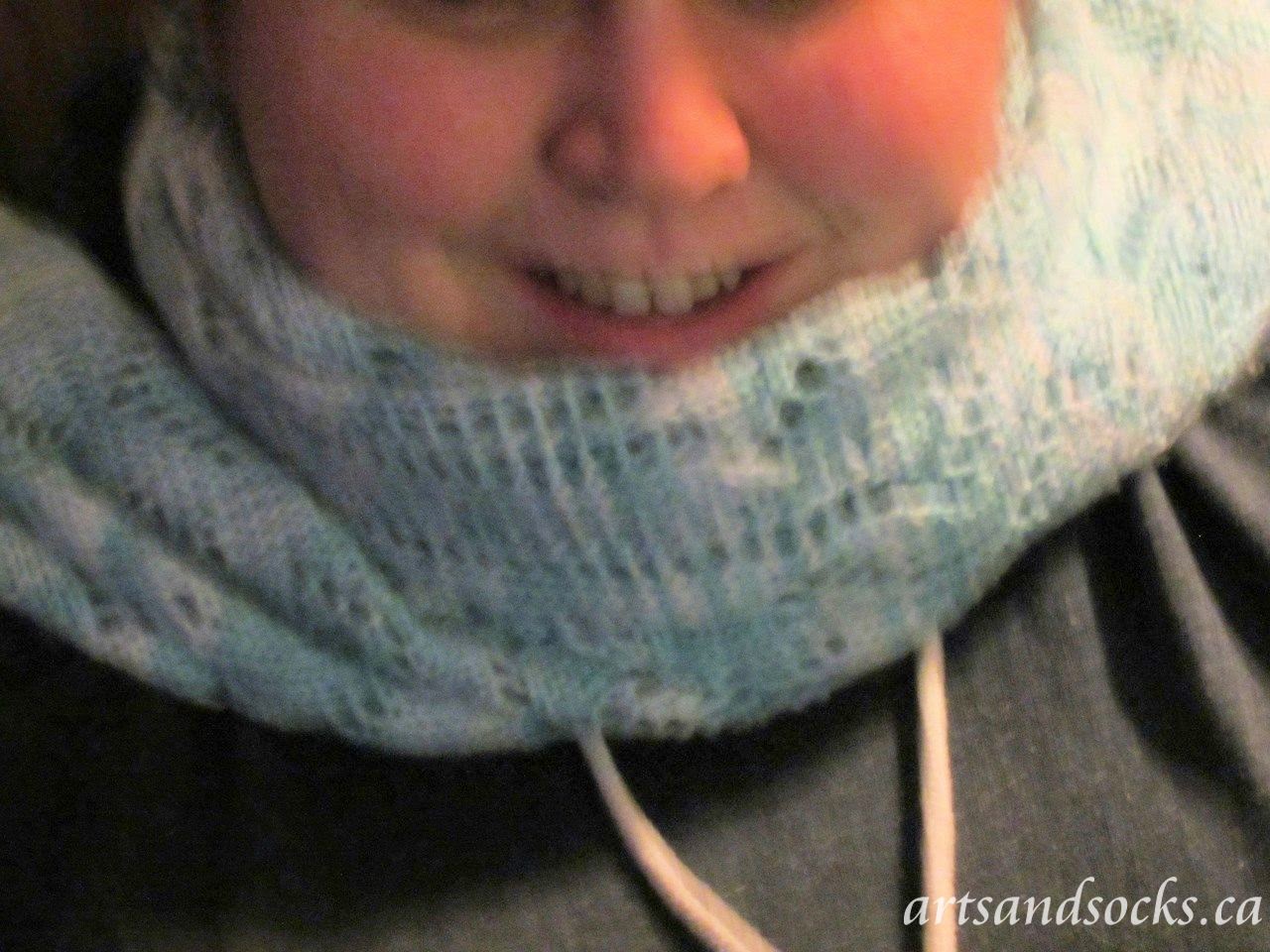 Sorry, it was dark and I didn't use the flash.

This is how I spent Boxing Day, while others were insanely flocking to the malls. 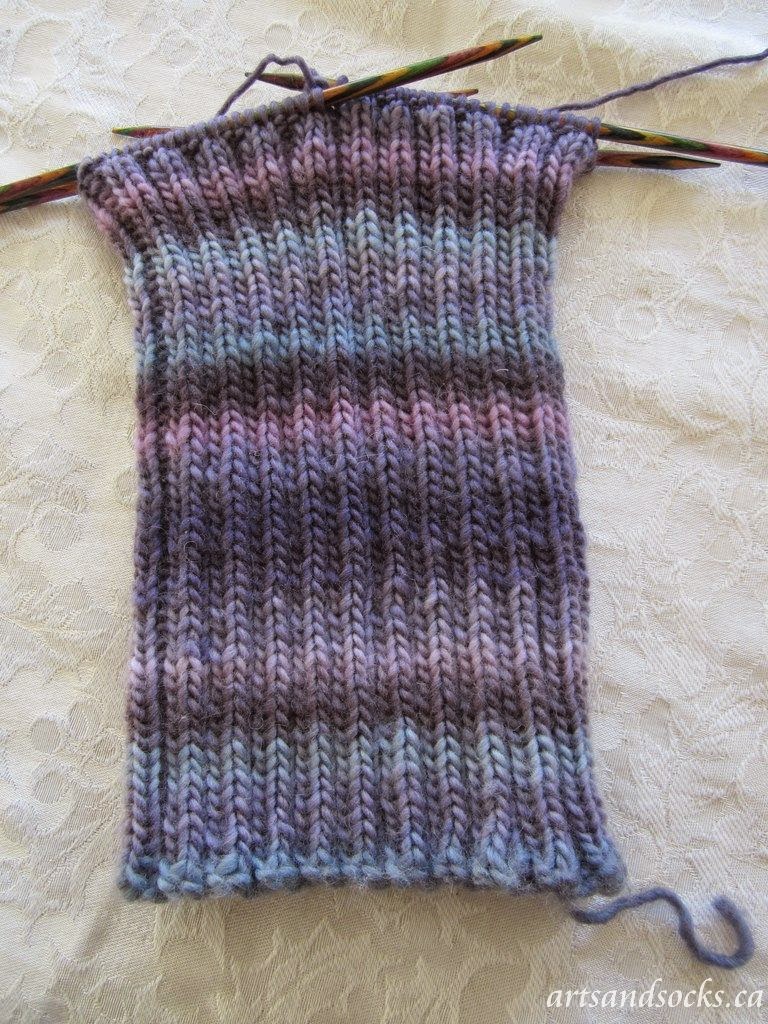 It is nearly a hat. I think this one is going to go to the Warm Hands Network.

And this is how Gaston spent Boxing Day. 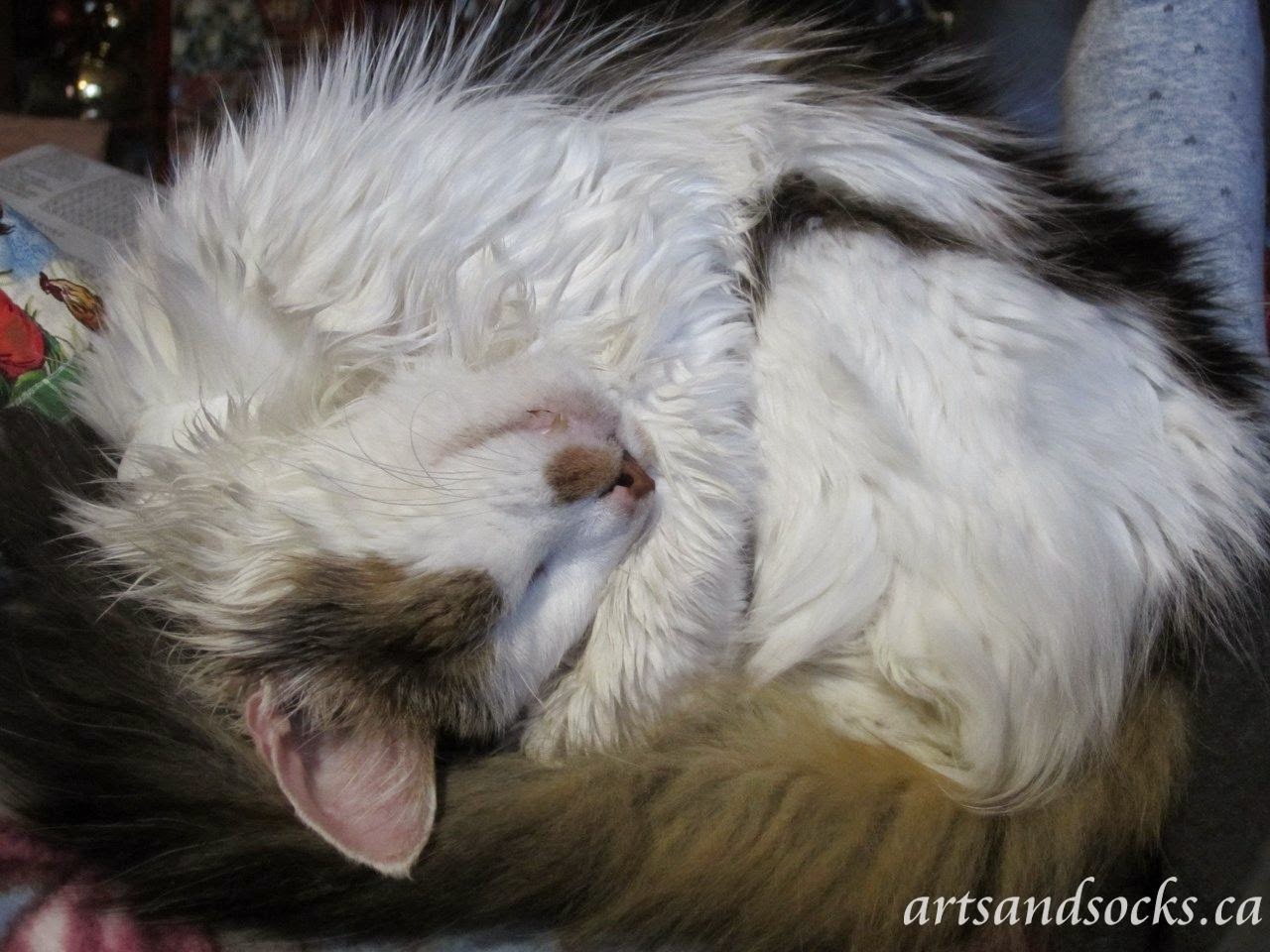 That is my foot, in the right top of the picture. The fire is just past my foot. 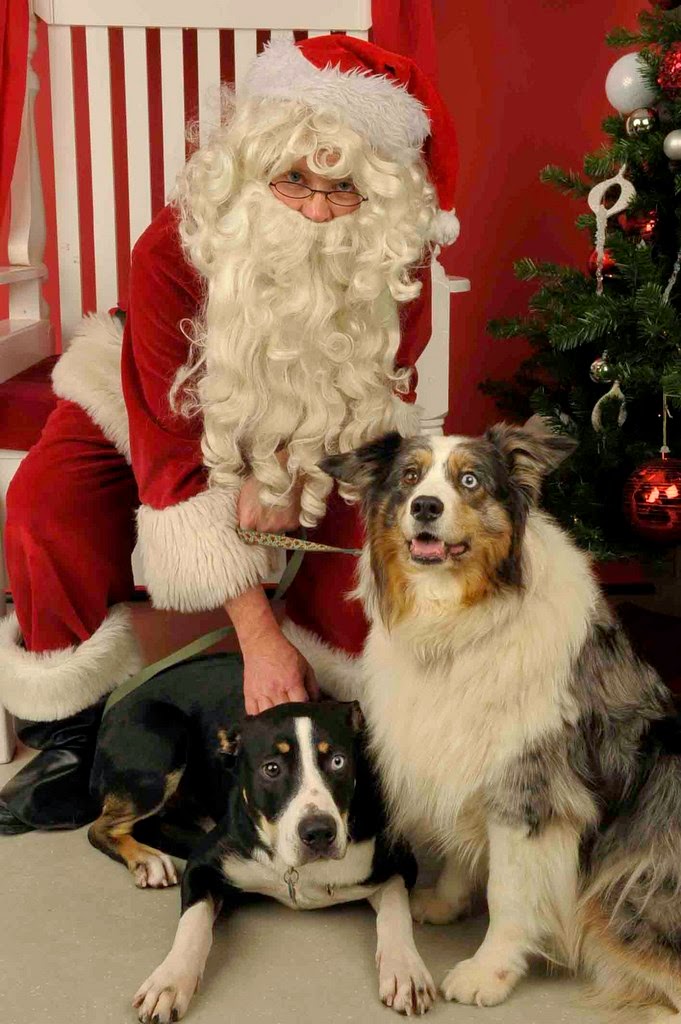 Doug and Dolly went to visit Santa Paws in support of the animal shelter.

Doug told Santa there wasn't anything he wanted for Christmas, since he had a new home with a wonderful big sister, good food and a soft bed.

Dolly said she wanted all the animals at the shelter to find homes with families to love them.

They want to wish you a Merry Christmas.

A Guest for the Holidays

Doug has settled in nicely, so we decided to offer accommodation over the holidays to another foster cat. 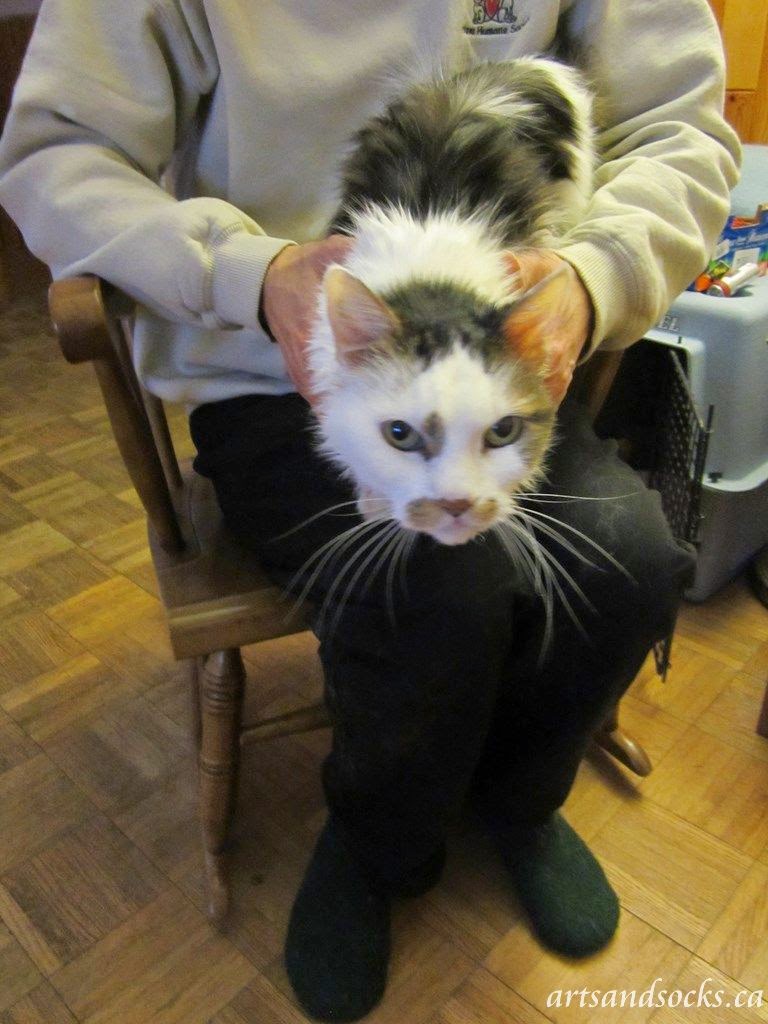 He is about 10 years old and had apparently ended up homeless and living on the street.

He looked better after a bit of a brush. 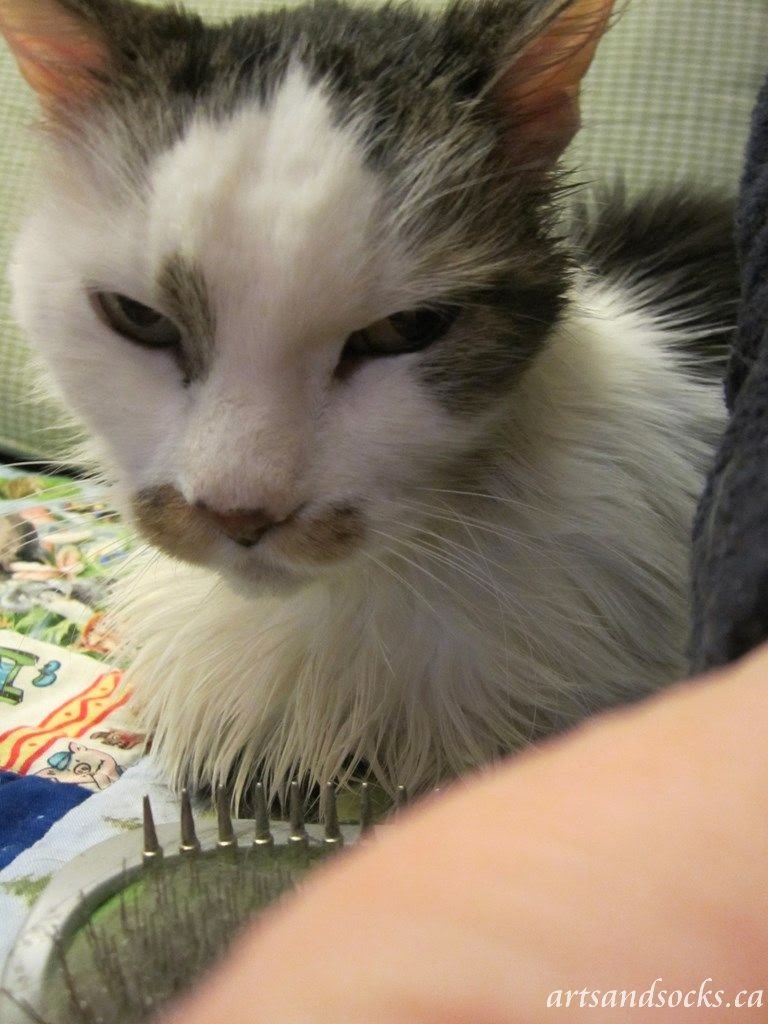 We thought his mustache made him look French, so we gave him a French name.

Email ThisBlogThis!Share to TwitterShare to FacebookShare to Pinterest
Labels: Cats

I just realized that I haven't blogged in quite a while. It got me wondering what I had been doing.

I checked my camera, and discovered I had been very busy.

We went to see Santa. Here we are waiting our turn to see the Big Guy. 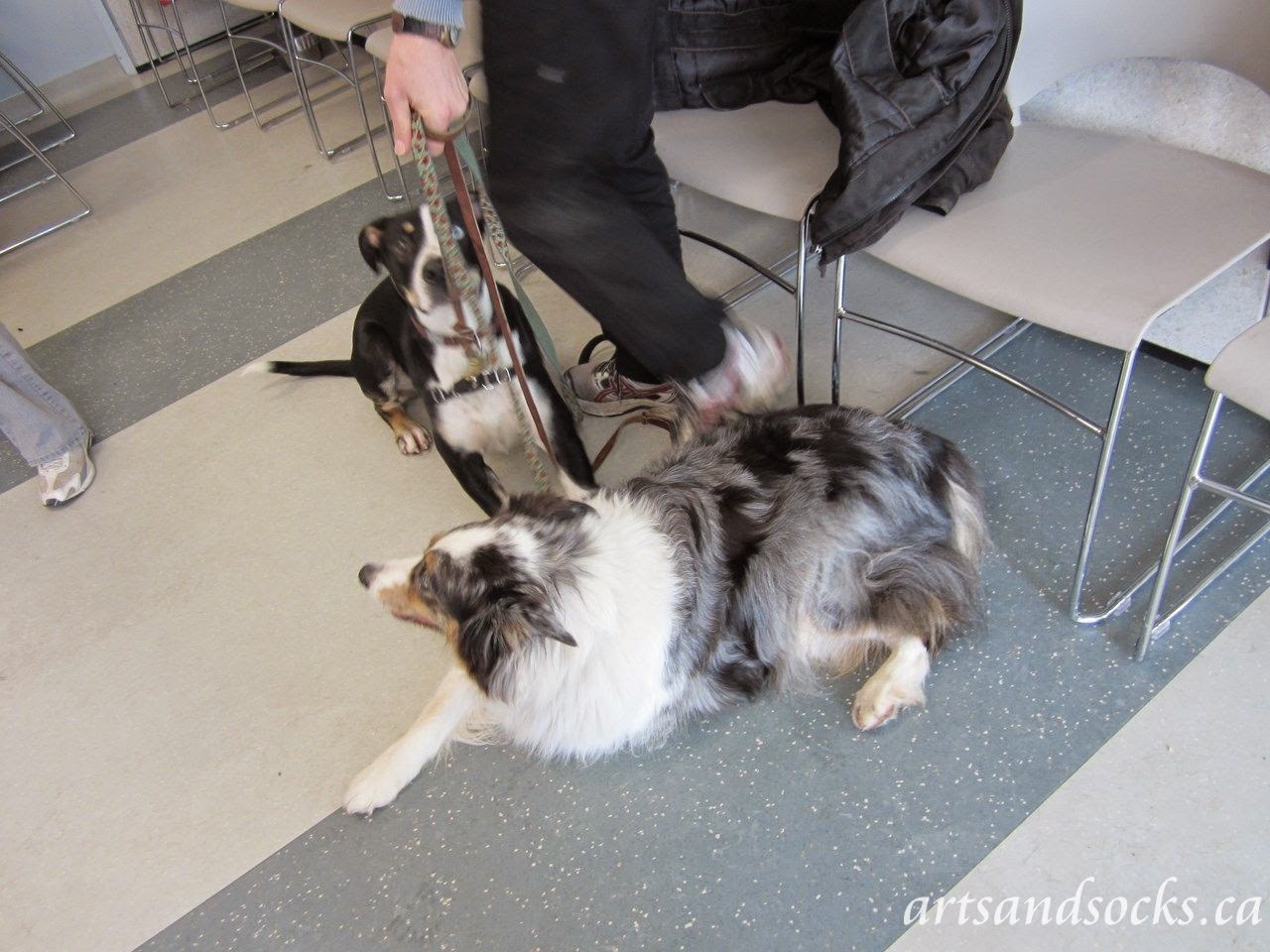 We put up the Christmas tree. I was going to post a picture, but I still haven't quite finished. The boxes haven't made it to the basement yet!

We had one of our former foster cats over for a visit. Russell spent some time with us 7 years ago, and is now living with friends, who bonded with him during his stay with us.

Here is Russell when he was our foster.

Here he is, meeting Doug. 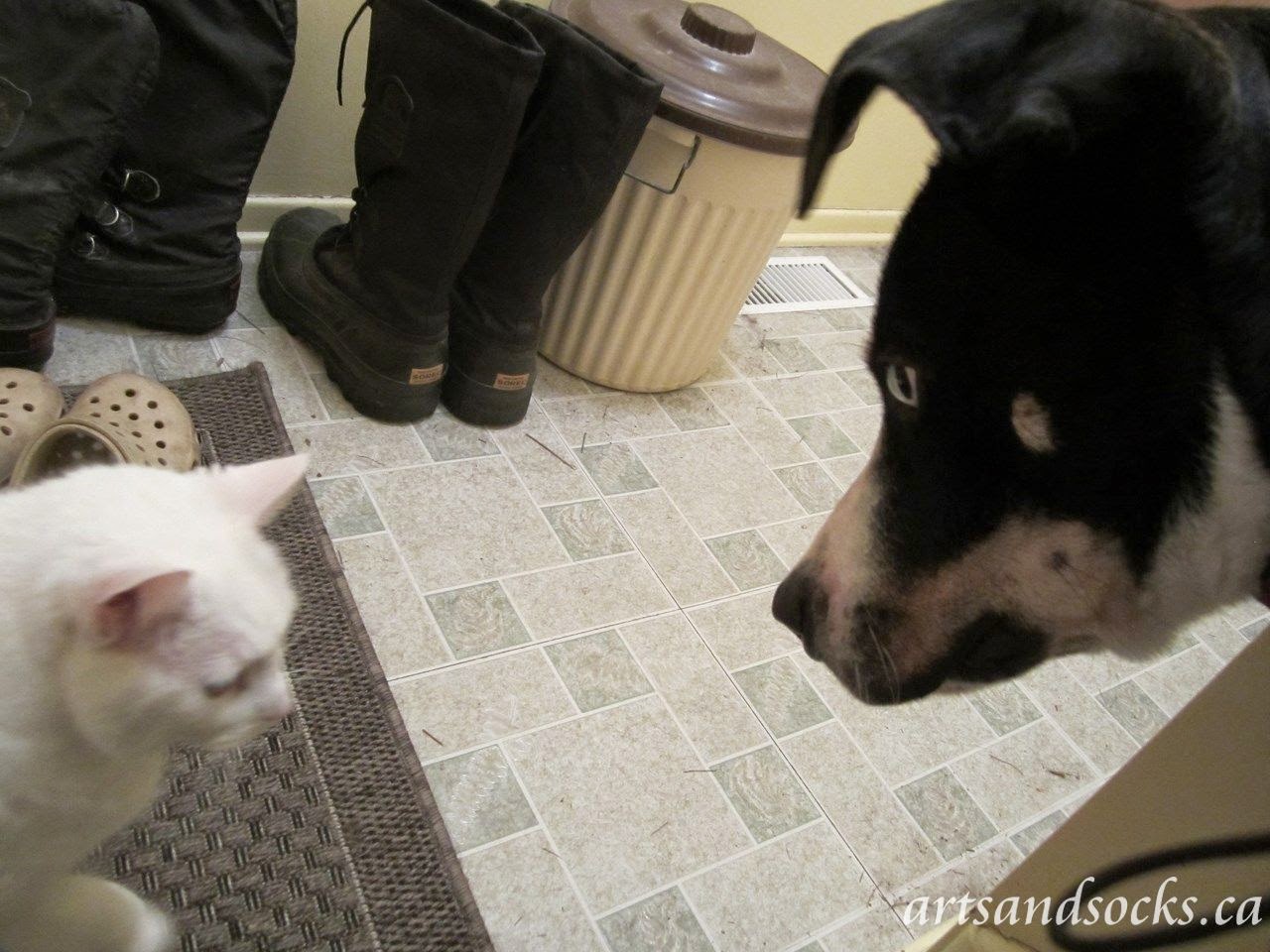 Not a great picture, but he is much bigger now.


I have also been knitting. My Advent Scarf keeps getting longer. I am now on Day 22 and since this is Dec. 22, I am now on track to finish it. 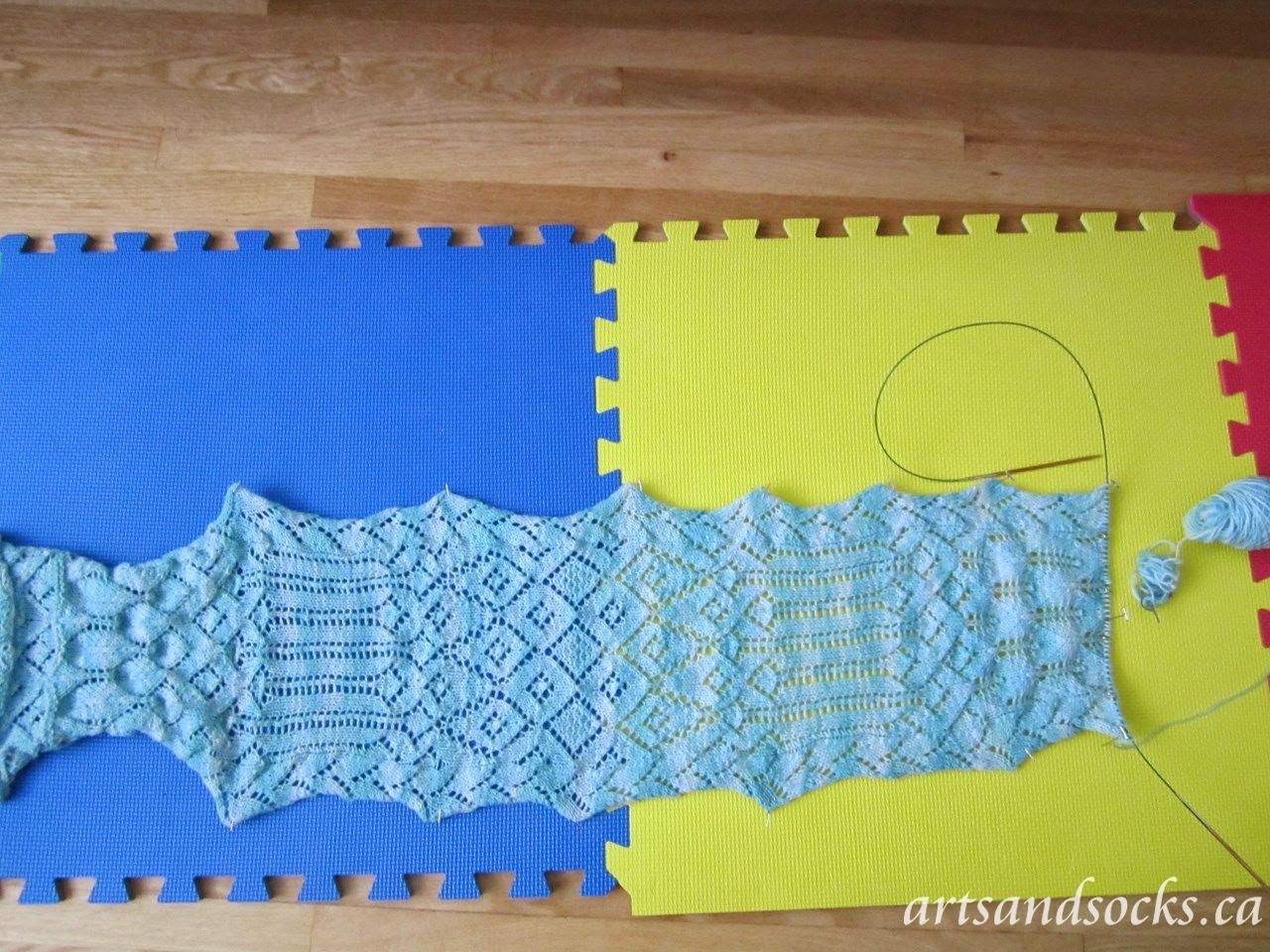 It is still rolling a lot and will need serious blocking.
A closeup of the centre lace. 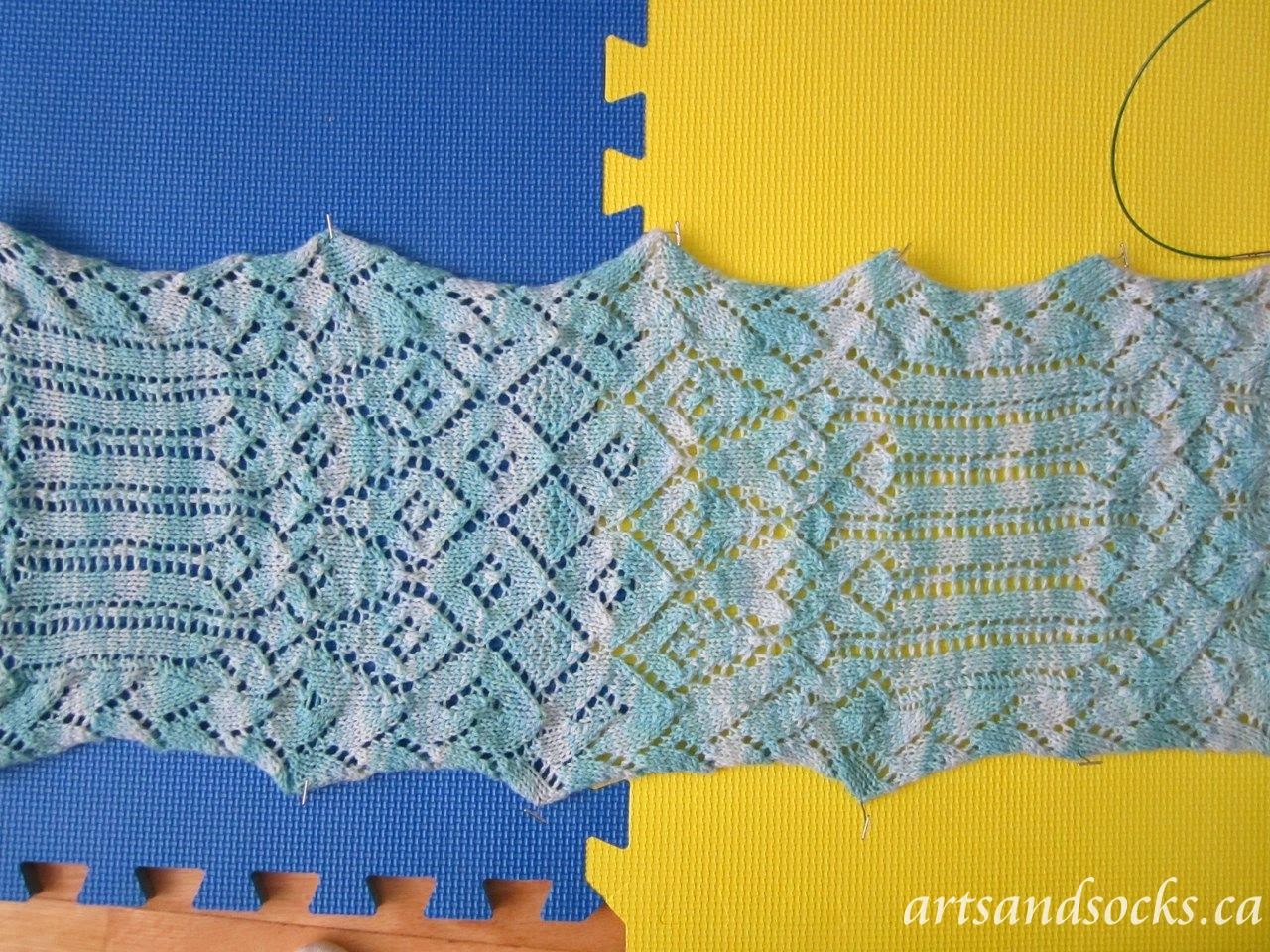 I am nearly out of yarn, so I am hoping a calculated this correctly. 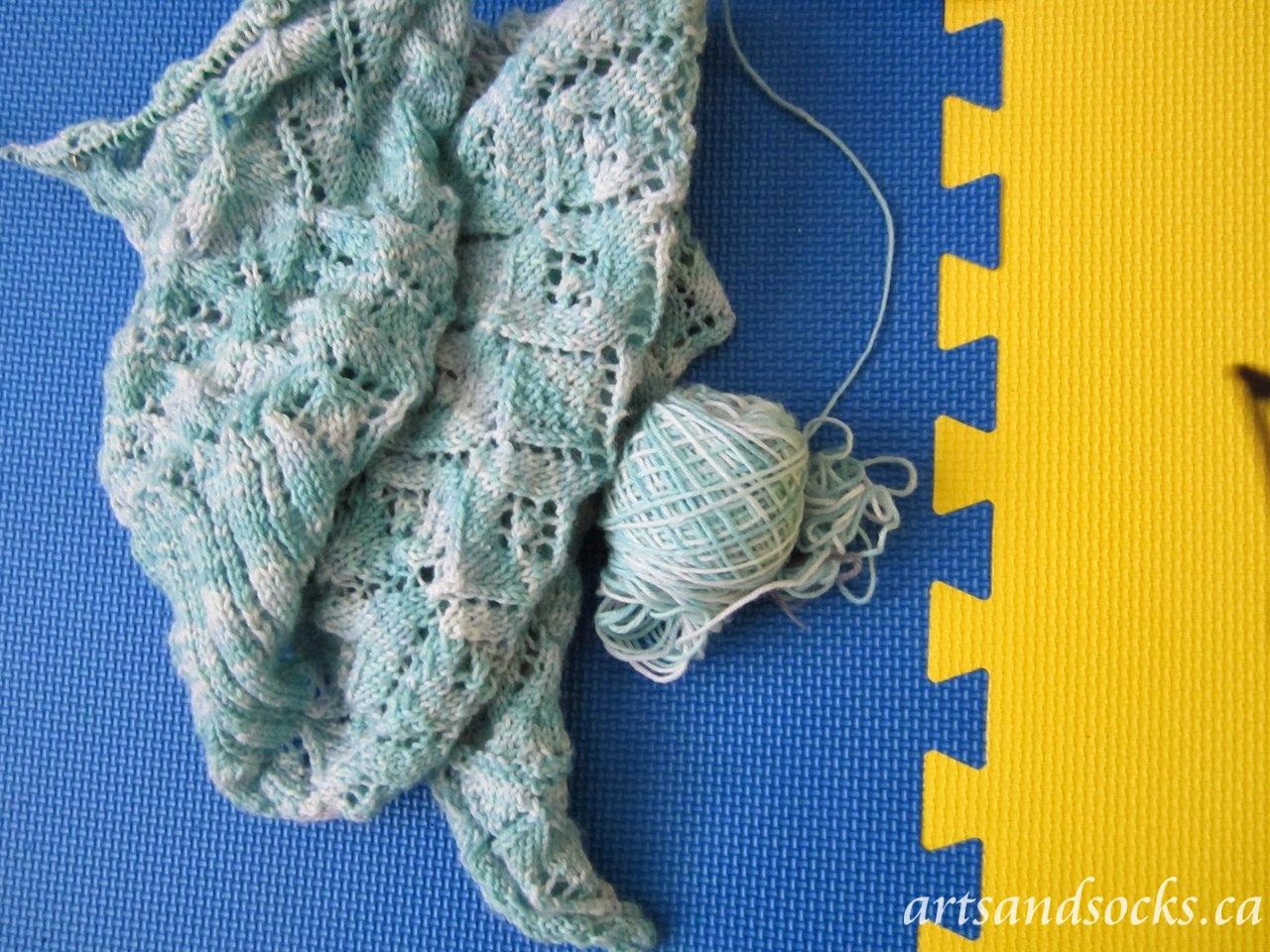 If I knit faster, can I finish before the ball runs out?

I have finished my Multidirectional Scarf.

I blocked it, and it is ready to mail. 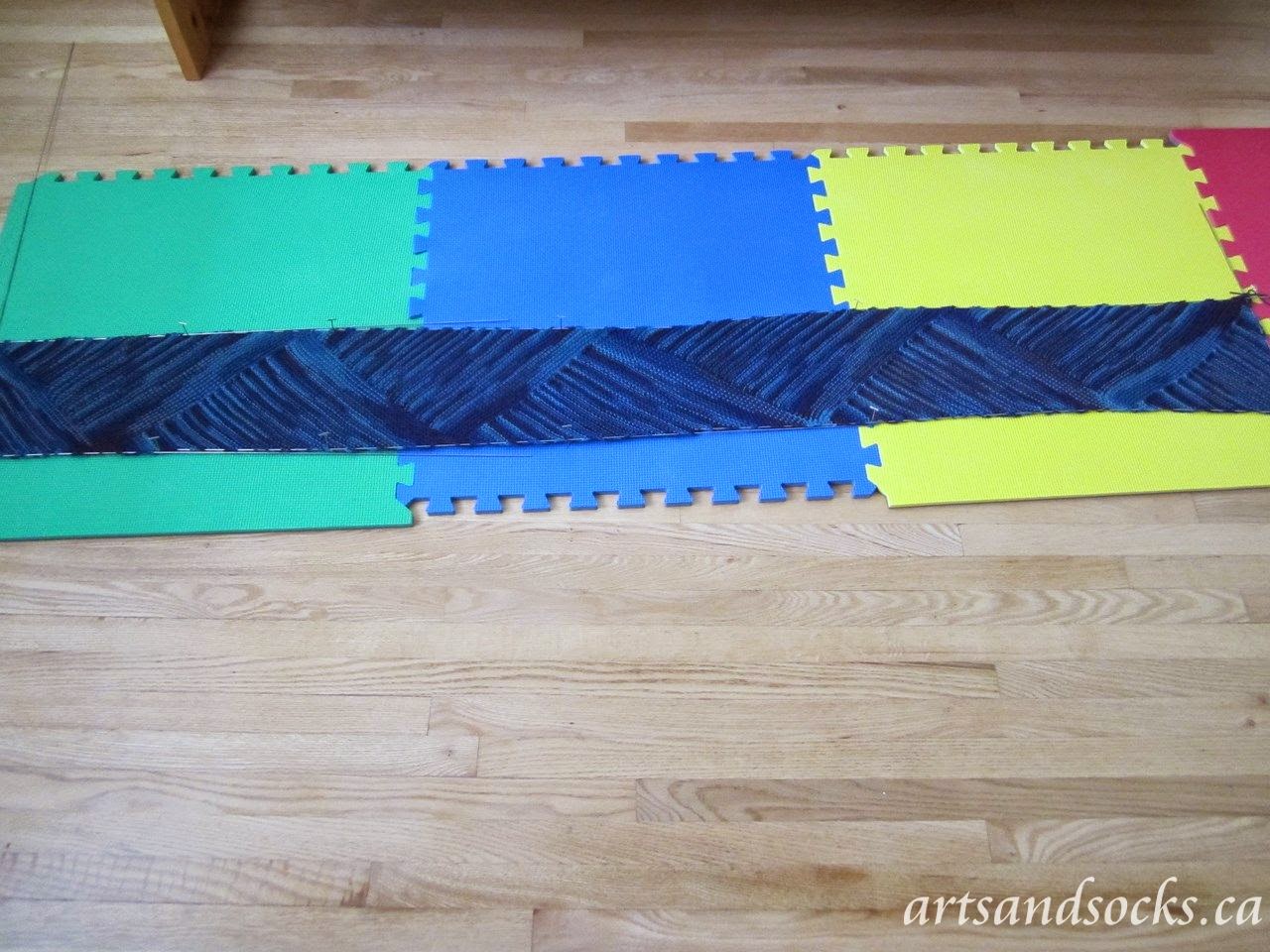 A close up of the triangles. 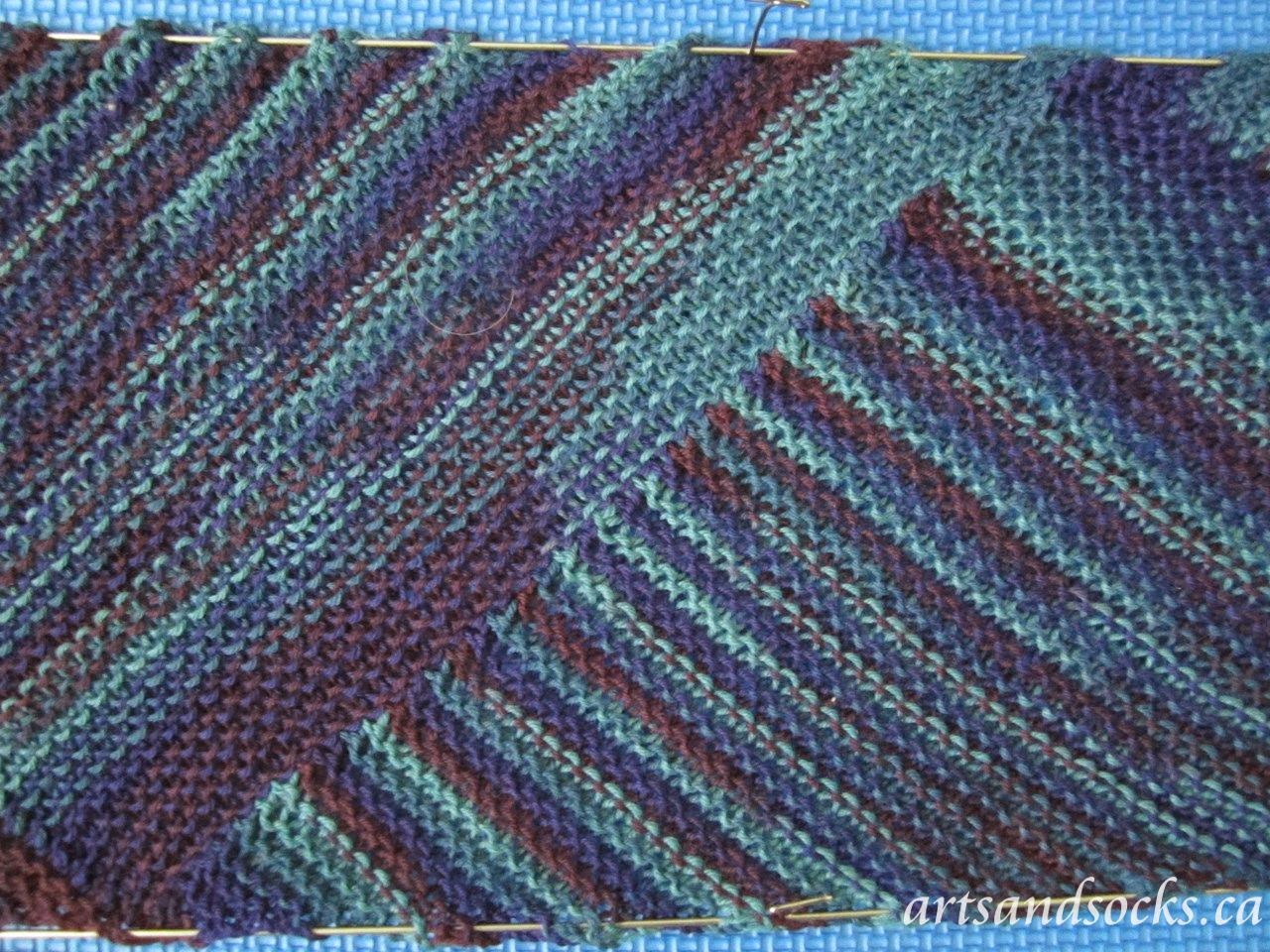 The colours are quite true in this picture.

Meanwhile, I foolishly started an advent knit along on Saturday. (just 6 days late) I finished Day 8 last night, and the instructions say to "faux" block it, so you can determine if you want to add some length to the middle.
I am going to add one lengthening section. I really like the look of the lace. Of course, the recipient will either have to wait until after Christmas, or they will be getting it unblocked, since the last clue is published on December 24!

The pattern is here.

Twenty-five years ago today, 14 young women engineers were killed at the Ecole Polytechnique in Montreal. At the time, I was the mother of 2 small boys, the younger just about to turn 2. I am also a Professional Engineer, and the previous summer, I had celebrated the 10th anniversary of my graduation with my classmates.

This event affected me deeply. Much like these young women, I could never see any reason why I should not be an engineer. I didn't even realize that this was an unconventional career for a women, until I arrived at school, and discovered that in my class of 120, there was only one other woman. I didn't think I was any different from peers. I knew if I worked hard, I was entitled to my degree. It was not any easier to get into the program as a woman. There were no quotas. I knew that there were people who were not accepted into the program, but it was not because of their gender. It was because they didn't meet the standard.  As a matter of fact, one of my acceptance letters started Dear Mr....

I was lucky. Although I was told, more than once, that I couldn't be an engineer, because I was a woman, no one ever tried to use violence to stop me.

Every year as this anniversary rolls around, I get angry at the slant that the press puts on this event. It is lumped together with domestic violence, as a symbol of men committing violence against women.

Twenty-five years ago, I saw this as an act of person committing violence against 14 other people because they had worked hard and become engineers, when he could not. They were engineers, and I am sure they were proud to be members of this profession. They believed that all people should be treated equally in schools and workplaces, and they died for those beliefs.

I can only hope that future history will remember them not just as women, but as engineers.

The Canadian Engineering Memorial Foundation  has been created in their honour.

Where does the time go?

I have no idea where time is going these days. I don't seem to have much to show for the passage of the days.

The scarf I started a couple of weeks ago is progressing. 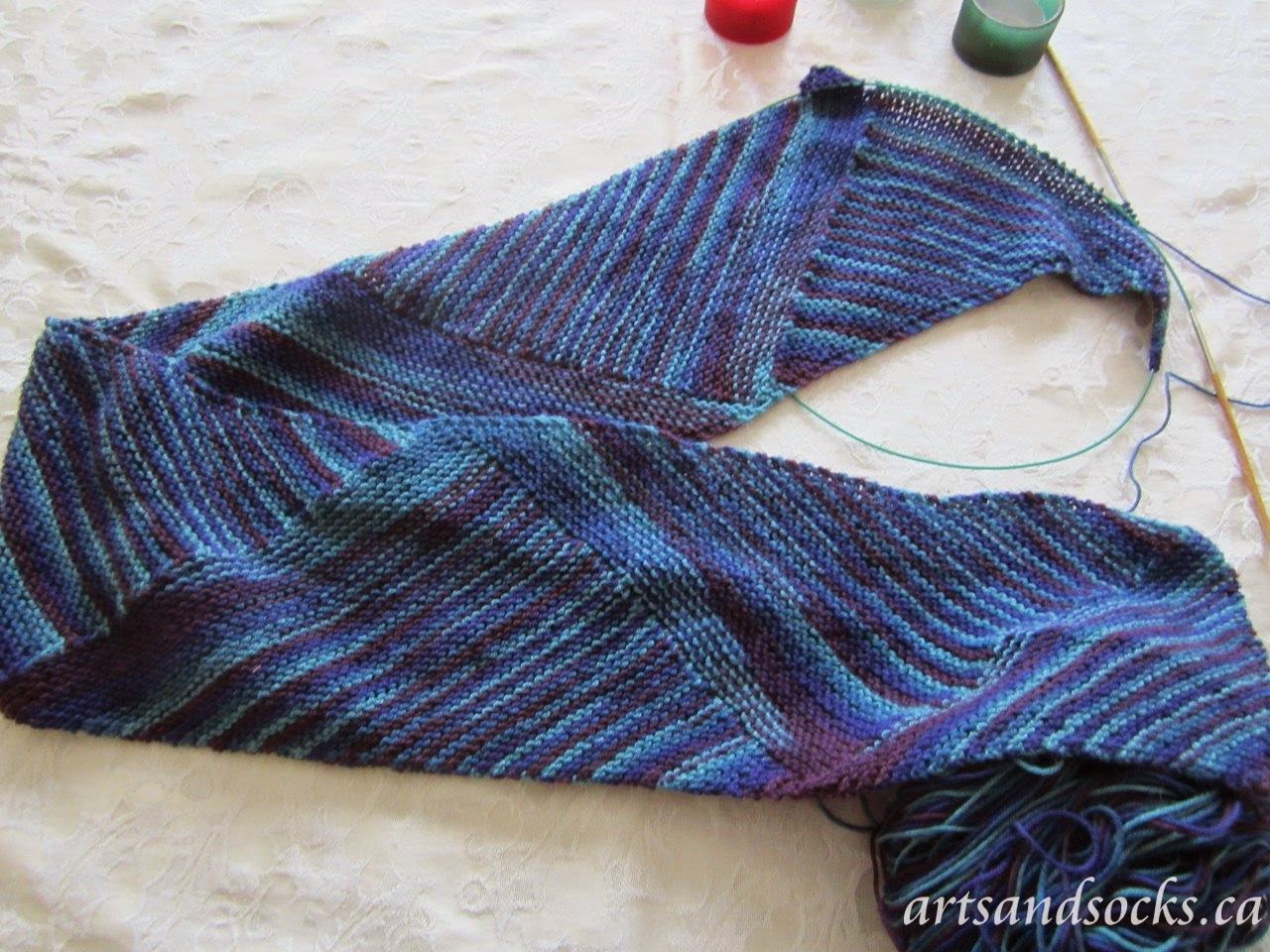 It is nearly 5 feet long now, so I don't have much more to do. I love the way the pattern shows off the colours.

Meanwhile, the yarn I had ordered arrived and I was able to start my latest knit along shawl, Bonnie's Wish. 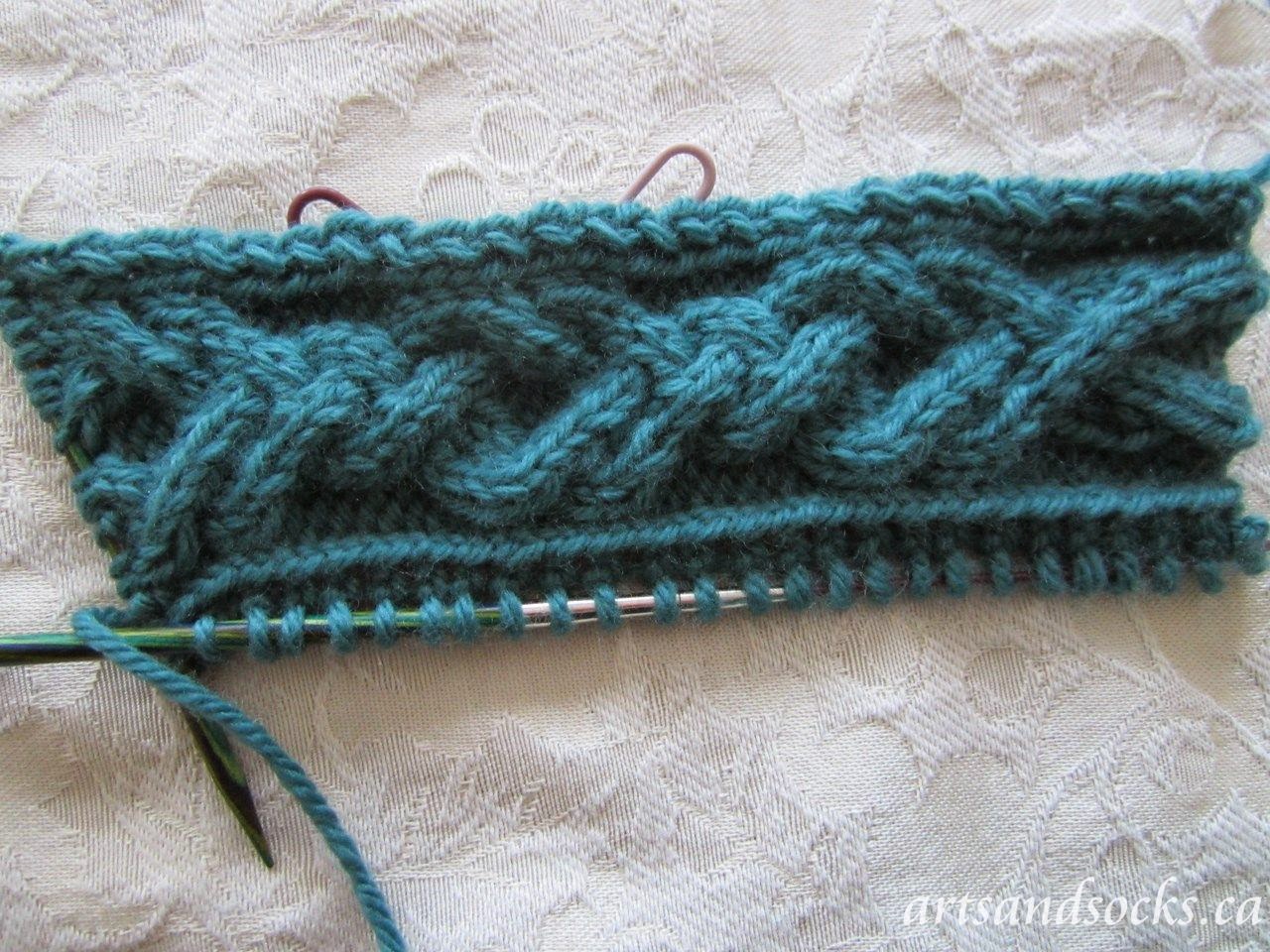 This will become the wingspan of the shawl, and the stitches along the edge will become the body of the shawl. I like it so far. Of course, I am already a week behind on the knit along, and I have about 12 more repeats of what you see in the picture! Luckily, this is for my own entertainment, and I don't care when I finish it. It just gives a change from miles of garter stitch for the scarf (or socks).

I had forgotten how much time a puppy takes. Doug is doing very well and becoming a valued member of the staff. I decided his job title is Under-footman. Here is a picture of nap time, as he cuddles with his beloved big sister. 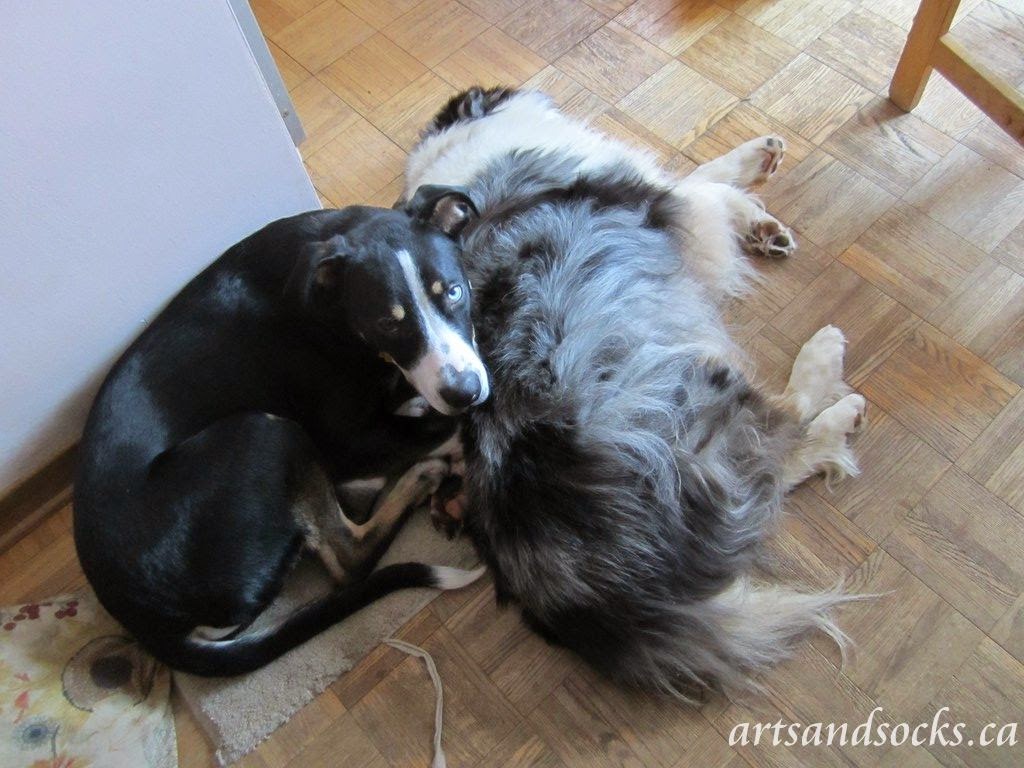