Thank You For the Music

I finished the quilt that I showed a couple of weeks ago. I don't remember when I started this. I spent about 2 years collecting up the fabrics. The top went to my retreat weekend, 3 times, I think.  It is amazing what a concerted effort will accomplish, once I decided to get it finished.

I am a big believer in the idea that done is better then perfect. I called this quilt "Thank You For the Music" 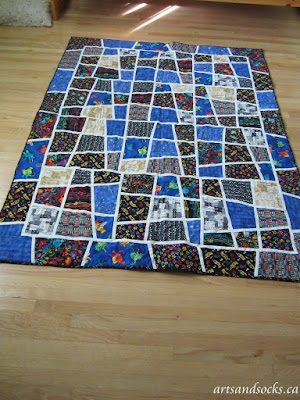 It is a very large lap quilt. I think it measures about 58" by 72". It is a gift for the child that caused me to learn to read music, long after I ever expected to learn. Music played a major part of both our lives for the years he was growing up, starting when he was 3. He is a man now, but I think he will like this. 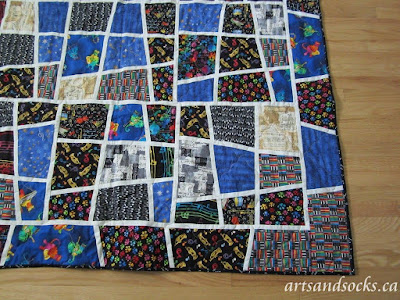 There are notes and music and paw prints, and jazz playing cats. Even the binding and the sashing have music notes. 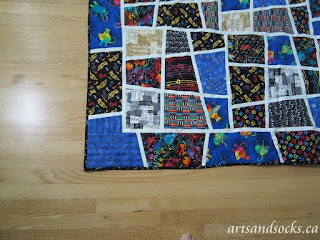 There is also some fabric that isn't music, but looks like it should be. It is quilted in a simple serpentine cross hatch, since done is a good thing, and I could get that done easily.

It even has a label. 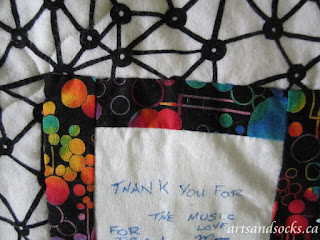 Nor fancy, but done! His brothers quilt had the last stitch put into the binding at about 11:30 the night before the quilt show, so it went to the show without a label. When it came home, brother grabbed it, and I never got a chance to add the label.

The pattern is "Magic Tiles" by Kathleen Bissett. Someone told me it was quick and easy. I didn't find either of those things to be true. Since it took me years to get it finished, I can see how much my skills have improved in just one quilt.

Linking up with the Needle and Thread Network.

Today is the last official day of summer, in Canada. For the past week, it feels like we are squeezing every bit of nice weather out of the season. It has been sunny and warm, really quite glorious.

My Rose Mallow is racing the weather, putting on a magnificent display of flower. 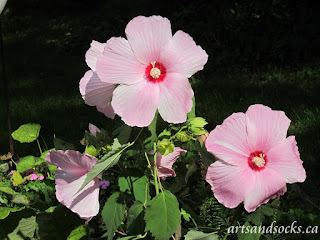 Usually, it puts on one flower at a time, but this year they are coming in bunches. There were 5 open at once.

My friends, Erika and Michelle decorated some two-bite brownies, to raise money for the Humane Society, at a local Community Fair. It was a beautiful day, so lots of people came. They tell me they sold all but 6 of their creations. Aren't they cute? 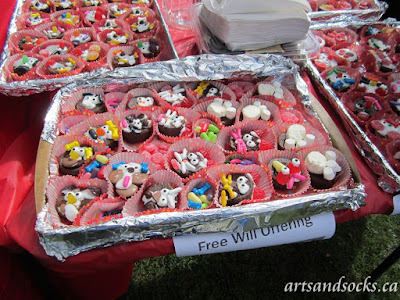 Just to remind us that winter is on the way, the evenings are cool. Sterling was feeling a bit chilly the other night. 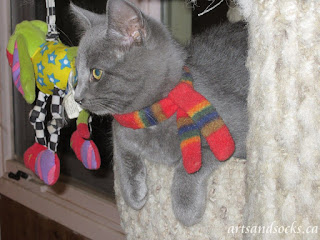 September 22 is also Elephant Appreciation Day, so it is appropriate that I show my completed elephant hat. 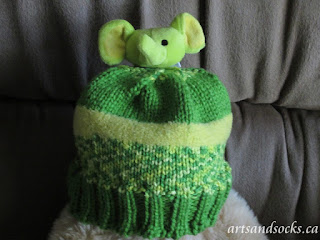 I think it is cute, but I was told this morning that some people might think it creepy.

A Finish and a UFO

I was going to post this yesterday, but I had a mysterious computer problem. I spent some time trying to figure out what had happened and finally determined the root cause of my problems...KITTENS! I should have figured it out quicker when I found them playing in my "office".

It appears that they were playing hide and seek, and some kitty stepped on the power button of my UPS. I may have to mount it on the wall.

Last week, I was asked to make a toddler hat for a friend. she wanted to give it to her niece. We searched my stash, and picked a pattern to search her chosen yarn. This is the result. 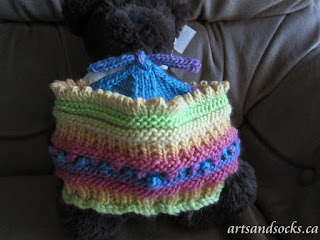 I think it is delightful. I am sure all the other toddlers in daycare are going to be jealous of her designer original hat.

The pattern is Fruit Roll-Up Hat, by Lauren Sanchez. The yarn is KnitPicks Chroma Worsted in the Groovy colourway.

And of course, the bear modelling picture. 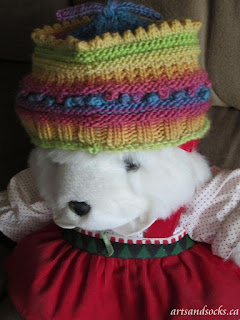 I love how the hat forms a crown around the top, just right for a little princess, without being too pink.

After I finished the hat, I went on a day trip, with a friend, to Almonte, ON. I found this in a store called Textile Traditions. 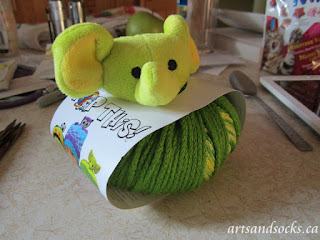 It is a kit for a simple hat, with a stuffy head where the pompom would go. I fear that I may start decapitating Beanie Babies to make more.

After all my studio tidying, I have picked the first UFO to work on. 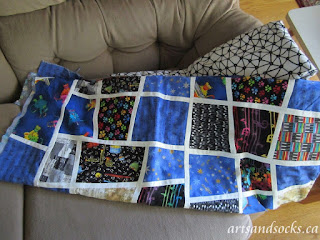 The top has made 3 trips to retreat, due to numerous problems. It has been finished for probably 3 years now. I even had a backing, which just needs a seam to make it fit. With luck, I haven't used the binding fabric in another project.

It's a Work in Progress

A friend was over the other day. She had recently retired from a position as an Educational Assistant working with Learning Disabled students. She has taken up quilting, and was over to get some help and shop my stash.

She looked at the stuff and decided I needed a more visual way to store my WIPs and UFOs. So here is her new system for me. 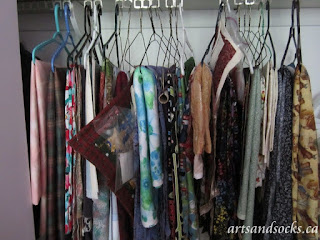 Tops are now stored, with their backing fabrics, in plain sight of my ironing board and sewing machine. As well, all my large pieces of fabric are hanging here. It looks much better, and motivates me to finish some of these.

She also kept coming up with orphan pieces of binding, from projects finished. Now they are in a shoe box, ready for when I need just a bit of binding. 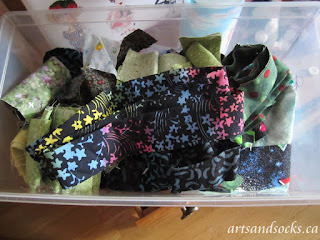 None of these ideas are new, I am sure, but somehow, when you are in the midst of your stuff, it often takes someone else, to show you the solution (she also donated some hangers).

It should be noted that she went home with a bag full of things that I will never use but she thinks she can have fun with. I also have a bunch of blocks ready to donate to Victoria's Quilts.

Meanwhile, September brought 30 degree weather. For the non-Canadians that is unseasonably hot. Not much sewing being done in my tidier room. However, I am still working on Kindling. 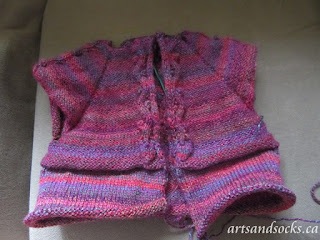 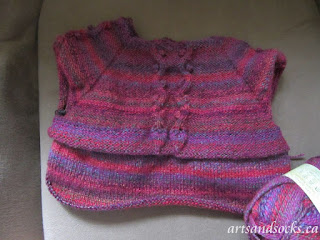 It is progressing nicely, although straight stocking stitch is a bit of a bore.

My kittens are getting more social. They had been brought to the shelter as strays and had very little socialization before they came to us. They have quit hiding and are now spending more time in our company.