The snow has given me lots of time to knit.  I am pleased to say that progress has been made. 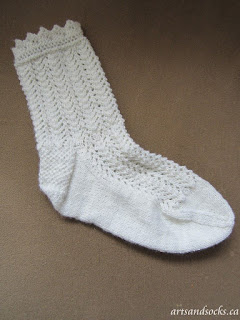 I have one lace sock completed. In line with my friend Cheryl's advice, the second sock was immediately started, before the needles had a chance to think of something different they might like to make.

The Valentine KAL Shawl is getting bigger. It will be an interesting shape. 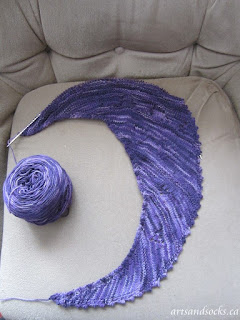 It is a bit hard to see in that picture, but there are hearts, knitted into it.

Finally, I started a cowl, just because. The yarn is a kind of silky synthetic, that I think will drape nicely, and is purple! 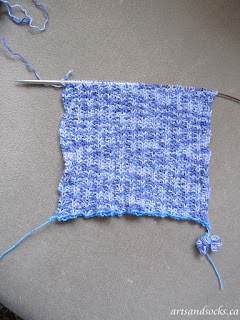 It looks kind of blue in that picture, so you will have to take my word that the yarn is purple.

The news is reported that we had a record one day snowfall. In fairness, I have seen this much snow come down at once, but usually, it is spread over 2 calendar days. This storm started around midnight and lasted until 8 PM . Officially we got 51.3 cm.  If you are unfamiliar with the metric system (or snow) it looks like this. 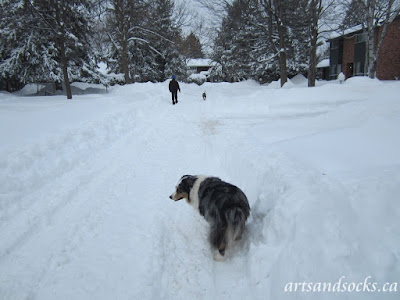 We were out walking the dogs. As you can see, the snow is higher than Dolly. She is walking in the rut left by the nice man who clears our driveway. The neighbours who had to get out today followed those tracks to the main road.

Canada Post has advised that some addresses will not be getting mail today. 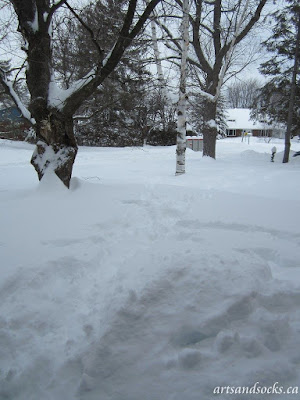 If you look carefully through the trees, you can just make out our mailboxes. They have the red Canada Post strip across the top. You might also notice that they can't get the doors to the boxes open, because the snow is partway up the doors. I think mine is one of the neighbourhoods with no mail!

So I have cancelled all my plans for today. I am not even going to try to leave home.

I started a new shawl on Sunday.  The pattern called for a 4.5 mm or a 5 mm needle.  My 5 mm was at hand so I used that. Yesterday, I decided that I wasn't 100% sure of the fabric I was getting. Since the pattern calls for two skeins of yarn, I just started again, using the second skein and the 4.5 mm needles.

Here they are, side by side.
Swatching while knitting! 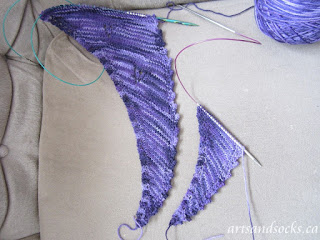 I think I will have to knit a bit farther to decide. Isn't the colour lovely and purple!

Meanwhile, somebody forgot to tell my indoor plants it was snowing. 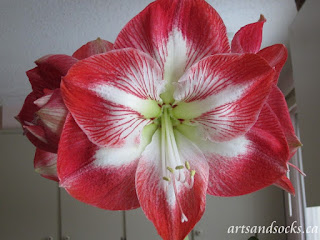 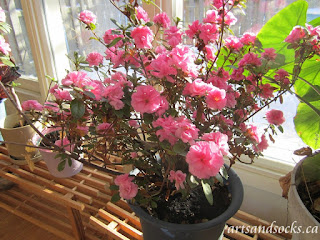 Now, all I need is a fire and a cup of tea, and my afternoon is set!

Yesterday was Family Day, and so I got to spend some quality time in my sewing room. I finished my January Bag of the Month, Betz White's Backgammon Bag. 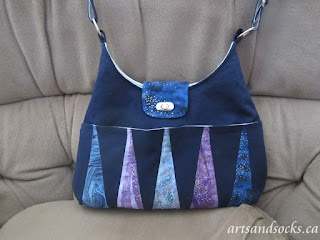 I like it, I think it turned out quite well. I had my doubts during the process, and yesterday, I spent a bunch of quality time with my stitch ripper, making everything look the way I envisioned.

I made the back a mirror image of the front, so the points match across the bottom seam. 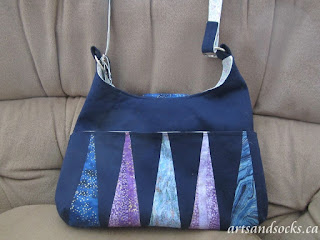 It makes sense to me. The points are from my vast fat quarter collection. I think most of them are Northcott, with a piece of Laurel Burch thrown in, because I love her fabric.

In the end, I used a white zipper on the inside, in part because I had a 7 " white zipper, so I didn't have to cut one. 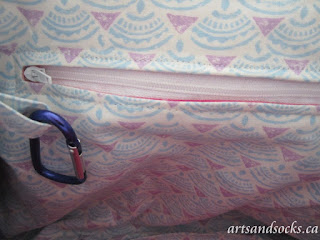 I added a carabiner to inside to hang my keys on. Otherwise I lose them in the bottom of my bag. Although it is hard to tell, the carabiner is purple.

I added a large slip pocket to the other side of the lining. It can hold my phone, pen, and other stuff that gets lost in the bottom. 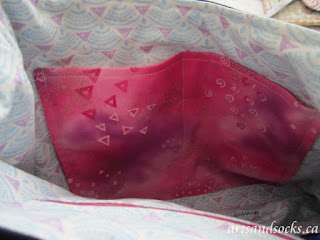 So, will I make this bag again? Maybe, but with changes.

I think I would like it better if it were slightly smaller. I would make the strap longer, so I could use it as a cross body bag. I think I might like to use a foam stabilizer like Soft and Stable to make the bag a bit firmer. I would also add some fleece to the outer pockets to make them more substantial.

I think I would put a zipper in the top, to make the bag more secure, and take the magnetic snaps out of the side pockets. I don't think the snaps will suit my lifestyle. I might also eliminate the back outer pocket and add a zipper pocket instead.

The pattern is currently only available through the Bag of the Month Club. There is a link in the sidebar. In July, you will be able to buy it from the Betz White website.

Email ThisBlogThis!Share to TwitterShare to FacebookShare to Pinterest
Labels: Bag of the Month, finishes, quilted bags

My journal says that I have been pretty consistent at working on something every day. Some days I sew for 2 hours, other days, I read patterns for 20 minutes. My challenge, my rules, so it all counts!

I received the pattern for the February bag for the Bag of the Month club. It is called the Window Shopper Tote, and it is huge! I expect it will make a great travel bag. You can see samples of it here.

Meanwhile, I am making progress on my January bag. 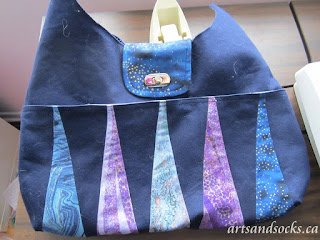 The outer shell of the bag is finished. Like a recipe I have never done before, I am following the instructions pretty much as given.  Looking at it, I see things I would change if I ever make it again. I think I would make it a bit smaller, to begin with. The bag is much larger then my usual purse. However, there is room for my knitting project bag along with my usual stuff.

The outer pockets don't sit quite the way I would like. I think if I do it again, I would add some fleece to the outer pocket. The pattern calls for just one layer of interfacing. Since the outer pockets have magnetic snaps, I think a stiffer pocket would be more to my liking. I also think I would skip the back pocket (which is the same as the front) and put in a zippered pocket at the back, for my keys and phone.

Finally, I think I would replace the twist lock with an inset zipper. 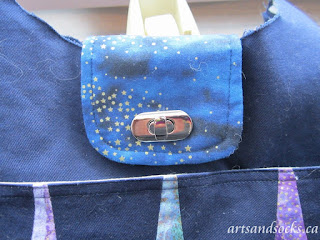 While the twist lock looks fabulous, very professional, it is really hard to install, requiring assistance from the resident brawn, as well as a punch to make the holes. It looks lovely and shiny, now that it is in. You can see the camera reflected in the plate around it.


Next up is a zippered pocket in the lining. 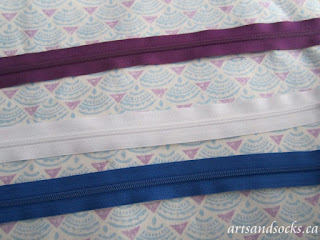 My initial plan was to use the purple zipper (of course), but I am going to line the pocket in hot pink, so I am thinking the blue might be better. 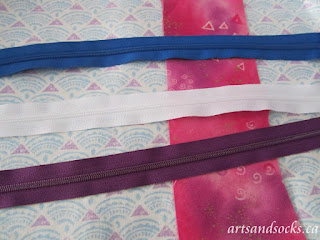 The white, which goes with both fabrics will just be lost, I think. Although, looking at the picture, maybe it is the right choice.

In my spare time, I have been continuing work on my lace socks.  The heel is turned, and the foot is nearly half done. 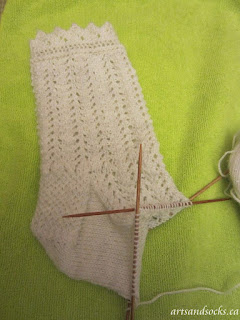 I used an "Eye of Partridge" heel, and I think it suits the sock, nicely. The yarn is a bright white, with a sparkle in it, but I took the picture late last night, so it looks ecru.

Hint of the Week (thanks, Michelle): My machine started making a loud clunking noise, so I cleaned under the bobbin. Now it is nice and quiet, again. When was the last time you cleaned the lint out of the bobbin area?

I learned today that another name for a groundhog is a whistlepig. One should never stop learning!

I love buying pots of flowering bulbs in February, and this week, I have a pot of purple hyacinth. 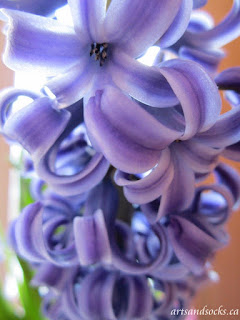 I was surprised and pleased that I have some people joining me, on my 29 day effort to spend at least 20 minutes a day on projects they wish to finish. Some are knitting and some are sewing. Welcome all, I enjoy company.

Today, I spent about 2 hours in my sewing room. Of course, much of it was spent cleaning up my teabag wallet marathon, and the scraps from 2 quilts I have put bindings on over the last 2 weeks. I also need to figure out where I had left off on my Backgammon Bag.

I began cutting out the pieces of the bag, and discovered that I should have cut the bag front and back before I cut the pocket pieces. I was left without a piece of fabric big enough to make the back of the bag (whoops). Ever resourceful, I did a bit of piecing. The seam will be inside the outer pocket, so I am sure it will be fine. 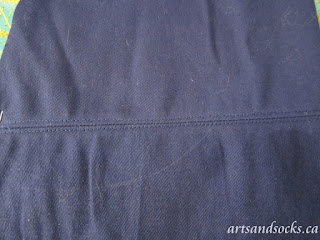 I have the front and back of the bag and the outside pockets cut. 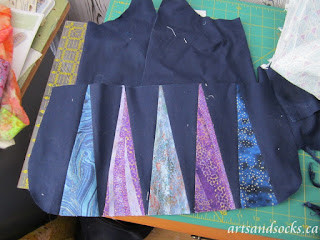 Next up will be the lining. 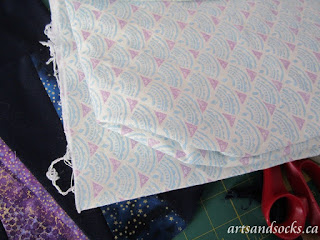 I like light coloured linings in my bags, it makes things easier to find. However, the inner pockets will be a surprise, because I can.

Fergus has taken a liking to the TV. 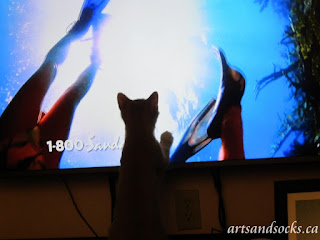 Perhaps he can take me on the cruise he is planning.