I spent a large chunk of yesterday, helping out the young people in the family and doing government paperwork.

The young people all needed help. The local ones had discovered that in -24C weather, the little one's snowpants have somehow disappeared. By late January, finding more is difficult, kind of like finding a bathing suit in July.  However, I used the phone and found some. I just needed to go and buy them. Meanwhile the Maritimers asked Dad to repair something that would cost $700 to replace. That had been finished over the weekend, but it needed to be mailed. Fortunately both tasks could be done in the same general location. Mission accomplished, though I was cold for the rest of the day.

Since I was hiding indoors for the rest of the day, I decided it was time to attack some paperwork. One item required me to go online and use the information the government had sent to fill in an online form. Guess what? The information they sent me was wrong. I spent a total of about 3 hours, trying to get it to work, one hour was on hold to their help line. I gave up after an hour, without every getting off hold.

This morning, I called again, as soon as they opened. I was armed with a cup of tea and access to YouTube videos of Say Yes To the Dress. This time, after 45 minutes, I finally got a real person, who told me I was doing it wrong. After some discussion, I discovered that the paper was wrong, and what I had done was exactly right. So, they will send me new paperwork, in a couple of weeks. Then I will have to try again. My biggest grumble is that there is no way to tell them they messed up, except by calling another number and being put on hold, again. Someone else will have to take up that challenge.

So, this afternoon, I stepped into my happy place. I spent some time straightening up my sewing room. I managed to get the ironing board clear. 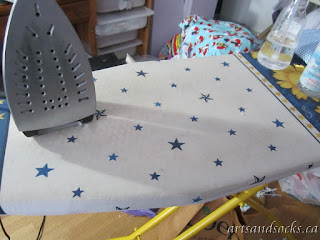 The rest of the room still needs work, but some progress has been made. I made the pattern for the first Bag of the Month for 2019. I have printed, cut and taped the pattern pieces. I even made a separate pattern piece for the outer pockets so I can fussy cut them.

I realized that I needed another fabric for my inner lining, since I didn't have as much lining fabric as I thought. After trying a couple of other things, I think this is the one. 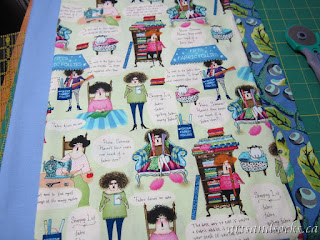 Since the bag has a zipper on top, the inner lining will only be seen when I open the bag, so a perfect match isn't necessary. The fabric is a silly fabric with funny lines about quilting. It has the blue from the outer fabric. as well as the green, I think Tula Pink would approve.

The fabrics are all ironed, so I can start cutting.

P.S. I also got my stove cleaned this morning. All and all, a successful day.

Decisions and Other Forms of Procrastination

I am trying to find and catalog my UFO's, but items keep jumping out, offering marvelous possibilities.

I am making some progress. 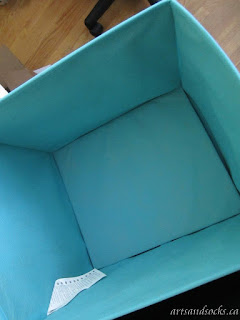 This is an Ikea Drona Box. I have had this one for some time, bought it to see if it would work in my sewing room. I thought I was using to store UFO's in. I dumped it out the other day, to add the contents on my list. Imagine my surprise, when I discovered that the box held plastic zipper bags, with the leftover fabric from projects that have been finished, along with the patterns. The fabric has been filed and I need to decide which patterns I might make again, and which can go to the give away table at my quilt group.

Meanwhile, a project jumped in the box. 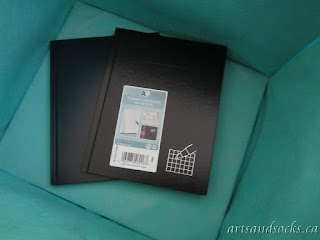 These are hardcovered notebooks, that I plan to make fabric covers, and give as gifts. Add that to the list!

I got the first pattern for this year's Bag of the Month Club. This fabric is waving at me, asking to become this new bag. 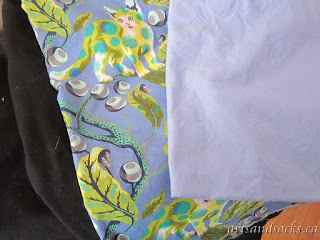 The black will be the main outer fabric, the Tula Pink cats will become the outer contrast and the periwinkle will be the lining. All of the fabric was in my stash, asking me to put them together. Not exactly UFO. However, it can go in the box, too. I think the inner pockets will need some Tula Pink as well. I have some fat quarters.

I remembered the other day that I had signed up for a Mystery Knit Along, that started on January 1. I did a stash dive and came up with yarn that will work. It isn't perfect, but it is okay. 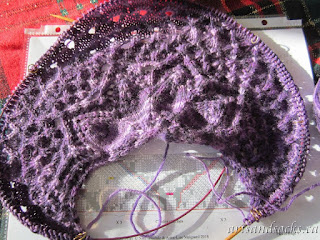 Yes, it is purple, no surprise. I am almost through the second clue, so I am catching up. I thought the yarn was a bit dark to show the stitches, but it works in the bright sun.

I still need to make the backing for the red quilt and baste it. In the chain of events, the ironing board will need to be cleared off first, so the backing can be pressed. I did get the backing and binding washed, so I made some progress.

I read the other day that one should make 3 goals for a week, instead of a long to do list. I wonder if that works?

My Annual Summary, and Plans. Or Getting Stuff Done

Since 2014, I have summed up my year, to remind myself that I actually do get stuff done. So, here we go again.

First off, the important stuff, the animals.

January saw the death of a friend and fellow dog lover. He entrusted us with the care of his dogs, so our pack grew to 4. The most elderly of the group joined his old master a few months later. It was sad, but it was also time.

So now there are 3 dogs, which keep us very busy. It is amazing how much more work an extra dog can be. However, Dolly, and Doug have welcomed their friend Ozzie into their space with much less trouble than we would have expected.

The extra dogs have taken time away from the foster cats. We were smart enough to realize that in the beginning, the cats would just be too much. We returned to fostering in August, and have had a total of 5 foster cats this year. This is Bubby, our currently sweetheart. He likes to watch TV with me. 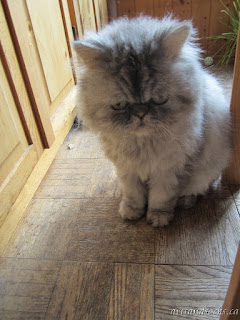 So my completed artistic projects:

I currently have the second of a pair of fingerless mitts on my needles and a couple of shawls I need to decide if I am going to finish, or not.

My biggest accomplishment was to finish my 1001 Nights Shawl. I blogged about it here. 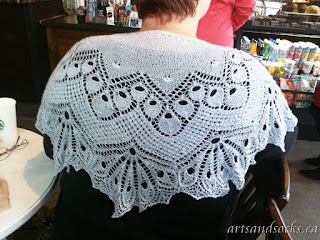 Oddly, my most popular blog post was for this bag. 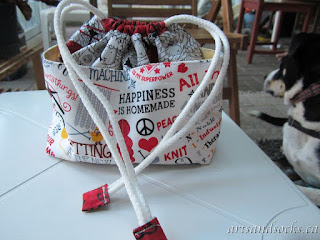 I'm not sure why it was so popular.

I blogged a total of 40 times here, and a few more times in another blog I am doing, not craft related.

I kept track of my fabric coming into my stash and the fabric leaving, in the form of completed projects. I added 12 metres and used 14.25 metres, so my stash is down 2.25 metres. The good news is that it didn't get larger. Perhaps I should track my yarn as well, this year.

For Christmas, I gave my sweet daughter-in-law a quilt top with the promise to finish it. So that will be first up for 2019.  I can't even remember when I made it, but it was a kit, so I have the backing and the binding. 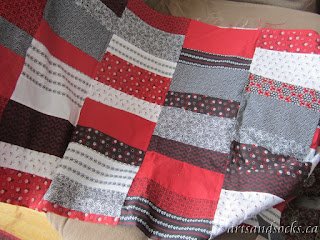 The first step on the way to completion is done. The cat has laid on it. 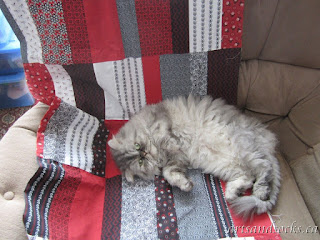 It got his approval, I think, though he can't figure out why I am laughing.