Last January, I noticed that the AQS Quilt Week was coming the Syracuse, NY.  Since that is a reasonable distance away, I had hopes that I might be able to go. Then life came along, and it looked like there was no way I would be able to make the trip. Family responsibilities were going to get in the way. I sort of forgot about going.

A couple of weeks ago, a friend called, asking me if I was available to go with her to the show in Syracuse. I realized that the family responsibilities have been postponed for a couple of months, and I didn't have any good reason to say no.

So, I AM GOING TO QUILT WEEK!

Of course, when one is going to such an important show, one needs a quilted tote, to carry one's stuff. 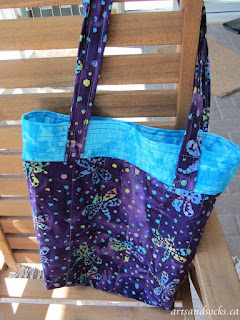 I made this cute tote, based on a tutorial from Bethany, of Sweet Bee Buzzings.


Not too big, with handles that will fit over your shoulder.

The fabrics were a good match, but the lining and top band fabric was much softer then the  dragonfly fabric. The top of the bag was a bit floppy when I was done. I decided to reinforce it, by stitching down the handles, near the top. 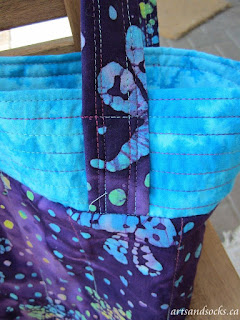 That did just what I wanted and now the top of the bag stays smoothly upright.

Another couple of pieces gone from my stash. More room for shopping at the show!

Lady GaGa's French Bulldog, Miss Asia Kinney, has a modelling job as the new face of Coach Pups. You can check out her picture on the Coach website.

Tillie decided that she was the perfect spokes model for Arts and Socks bags, so here are some pictures of her recent photo shoot. 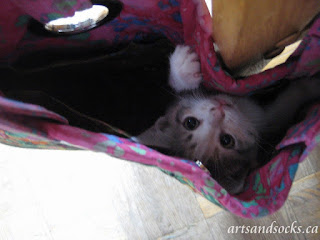 A little too dark, Tillie. 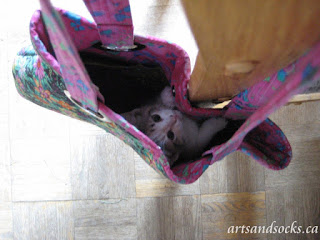 You can see more of the purse, but maybe not the best angle. 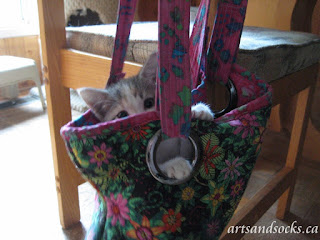 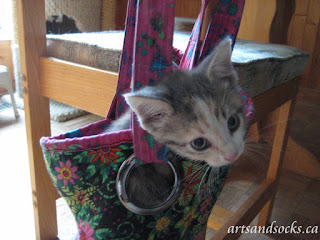 Perfect, I think that qualifies as the money shot!

Every day is a silly day, with a house full of kittens.

Another Brick and The Perils of PUL

I wanted to try PUL fabric as a lining for some of my makeup/ toiletry bags. I had found a source, in Canada (actually, fairly nearby) and last weekend, Simplifi Fabrics had a flash sale on PUL.  Obviously, I was meant to get some to try. I ordered on Sunday and was pleasantly surprised when my fabric arrived Tuesday afternoon.

I decided to try it right away, so I made another brick pouch.

I was fairly pleased with the end result, but I had a few problems along the way. This might not have been the best project for a first attempt at using laminated fabric. 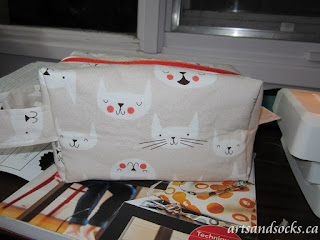 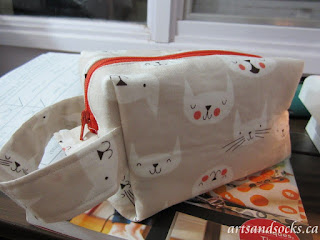 The outside looks pretty good. This is another fat quarter, from my stash, which, of course, has cats on it.

The inside certainly meets most commercial standards. 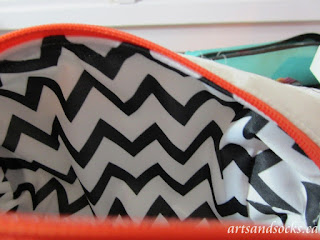 However, it fails to meet my standards.

The laminate on the back side of the fabric is sticky, so it doesn't feed well through the machine, and rides up on the batting, so my first attempt at top stitching the zipper, ended up as a mess. I took a picture after I picked out the seam. 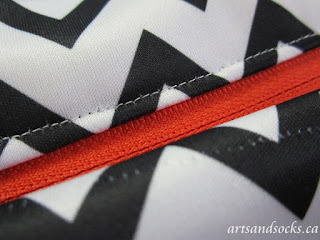 You can see that the line of stitching on the lower edge was way off. So, first lesson learned: clamp the bottom edges together to keep the fabric from riding up. 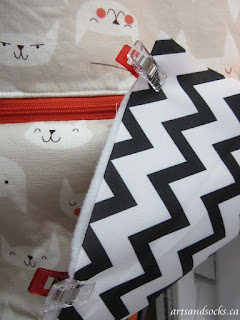 Since the fabric was sticking to the presser foot, and I don't have a Teflon foot, I tried parchment paper strips on the seam line. 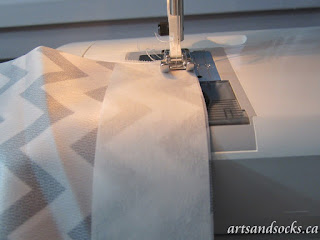 Better, but I substituted slippery for sticky.

Try number 2: I used some of the paper piecing paper. I had a couple of pieces that had misfed through the printer, so I didn't mind cutting them up. (Of course, I never throw anything away, so the slightly scrunched pieces of paper were still next to my printer, waiting for me to think of a use.) 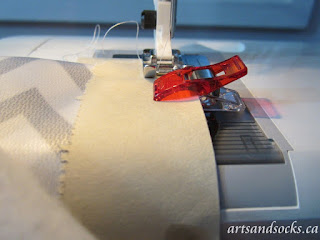 This worked much better, although I couldn't see the fabric underneath. This only became a problem when I went to box the corners. I solved that by cutting the paper the exact size of the seam, laying it across the corner so it just touched each end, and sewing across the line I had drawn down the centre. I forgot to take a picture of that.

In the end, I had to rip out the stitches near the end of the zipper, on the lining and redo them by hand, and I ended up with a pucker in that seam. Otherwise, since my lining seams end up between the layers, my other problems weren't noticeable, except by me.

I think I will look into getting a Teflon foot for my machine. I expect that might be a better solution. I have seen people who claim that the walking foot will also work, but it doesn't get into the tight corners very well.

After all that, a dose of cute, as your reward for reading this far. 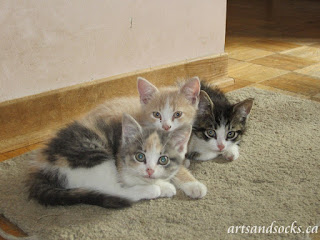 Birdie, Will, and Charlie, all lined up, trying to figure out what I am doing with the camera.

I was surprised on Friday morning to find in my inbox, the first clue for the next Mystery Knit Along from Fiddle Knits Designs, Water.

I had forgotten when it was suppose to start. Fortunately, I had purchased yarn for it at the same time as I purchased the yarn for Earth, the previous MKAL, and I had already wound it, so I had no problem getting started.

The first clue is often the easiest to finish in her designs, and I finished it last night. I am liking it. I might have to keep this one for myself. 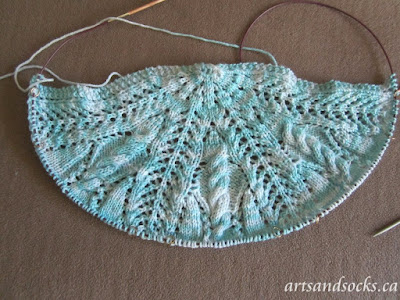 The yarn colour is called "Frozen" and the yarn is Knit Picks Stroll Tonal. It is looking good, so far.

This morning, I found this little surprise on the counter. 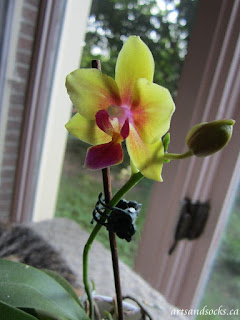 It was a grocery store purchase from about 4 years ago. This is the third time I have managed to get it to flower. 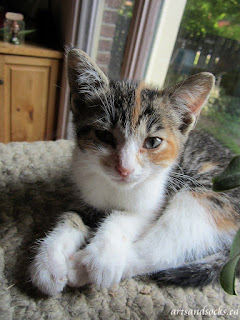 She was grooming the leaves, while I took the picture.

Mowgli returned to the shelter, today, so he could find his forever family.

So now we have a new set of fun. 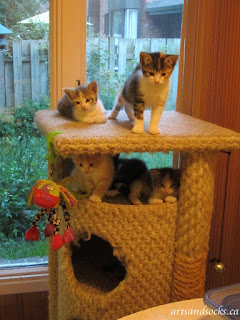 It is hard to see but there are 5 of them. We have been joking about counting the legs and dividing by 4. Here's a closer view: 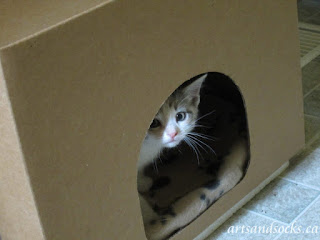 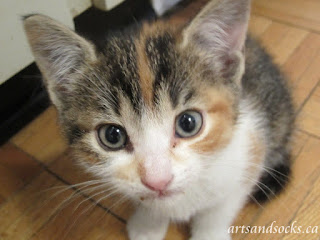 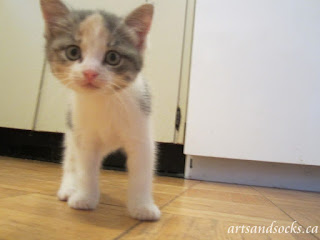 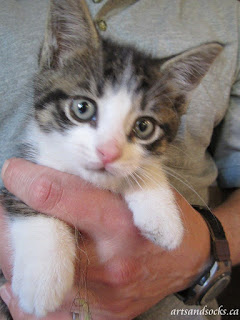 And Boy 2 with one of the girls 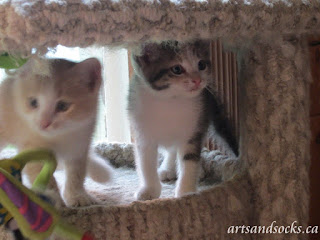 They don't have names yet. I have asked some young friends of mine to help. I am open to any and all suggestions.

Just in case you think getting the pictures were easy, I took 65 pictures to get these. Most look like this. 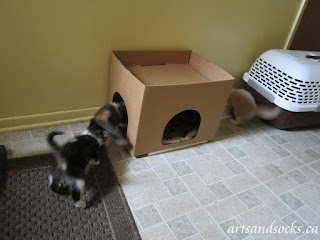 I think all 5 are actually in that shot. 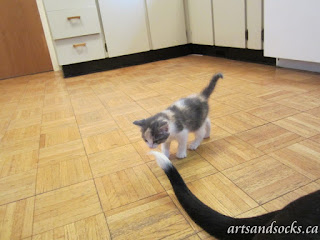 And they think Doug is some kind of big toy.

With this kindle, we have now fostered 149 cats and kittens. We are still having fun!
(Kindle is the collective noun for kittens, related or not.)