Awhile back, I made a pledge to finish my Christmas Tree Skirt. I can now say, it is finished, completely finished. It won't win any prizes, since it won't ever be entered in any contest, but it is done.
While I was working on quilting, Mary Fons announced an essay contest, on her blog. so, while I was quilting, I composed an essay about the quilt. in my head. I typed it up, and printed it. I even mailed it to Mary. So, binding finished, I will share my essay with you. 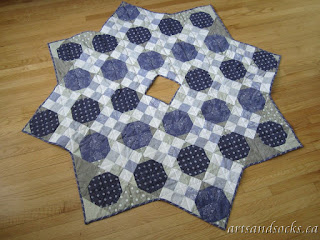 I bought a kit to make a Christmas Tree Skirt, a number of years ago. It is in blues, greys, white and sage greens. The colours are not traditional Christmas colours, but I liked them. I bought the kit during a post Christmas clearance at an on-line quilt shop. So it arrived in January, of 2010, I think.

There is a problem with making a Christmas tree skirt. One only thinks about it in late November, when one is too busy to do anything about it, so it gets forgotten for another year.

The October after I bought the kit, I took it to a quilt retreat and spent the weekend making the blocks. The blocks are nine patches and snowballs, set on point, with setting triangles. By the end of the weekend, I had the blocks completed and the blocks sewn into rows. I was sure I could get it finished by Christmas.

In February, I decided that the only way I was going to finish this, was to try to work on it every day. Forget the free motion, straight lines would do fine. Even if I only did one row of quilting, each time I sat down at the machine, it would eventually get finished. Of course, I would need to be able to set up the machine and just leave it, so that I could do a row, whenever I had a chance.

So, whenever I have had a few minutes, I have added a row or two to the quilting.  I am quilting it on my 1939 Singer machine, a wonderful flea market find. Since I haven’t quilted on this machine before, it isn’t my best work, but it is okay. After all, the finished product is going to lay on the floor, with presents piled on it, and probably a cat sleeping on it. As I sew, I revel in the engineering that went into my 1939 beauty. I wonder what her story is. The decals are pristine, so the machine was barely used. The machine is sitting in front of a window, where I can see the street, and watch the snow, the neighbours, and the kids coming home from school. The time passes quickly.

Now, the quilting is done. The binding is made. I will trim the quilt and add the binding, either tonight, or tomorrow. I will take the quilt to my quilt group on Monday and show it proudly, at Show and Tell. It is done. It isn’t perfect, but it is done.

I have had one of those weeks, when I feel like I have hardly had a chance to catch my breath. However, I have a few things to show for it.

The ladies from the church Quilting Circle donated another quilt. 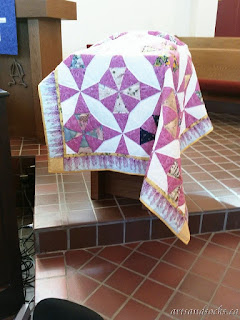 This one is a lap quilt and is going to a single woman who just arrived from Syria. I hope it keeps her warm, since today the weather is seriously cold, again.

I have completed the quilting on my Christmas Tree Skirt and I am on to the binding. 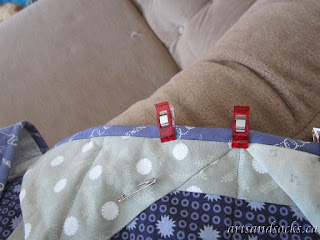 I am half way around!

Meanwhile, I got a new phone recently, and my lovely quilted case is the wrong size for the phone. 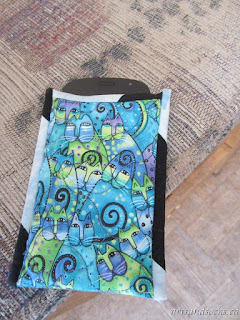 The case is too short and too wide. That was the last of my favourite Laurel Burch fabric, however, I remembered that I had this in my closet. 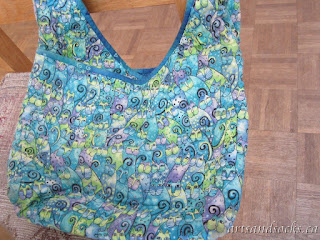 This is the purse I made originally, from that fabric. I carried it for about 2 years and the fabric is considerably faded, and the bag is worn in places. However, the pattern was called the X Bag and there is still pristine fabric inside the pockets. I just need to take the bag apart and wash it. So, I did that, and maybe, soon, I will have a phone case that fits the phone. The fabric is already quilted so I just need to cut, sew and bind. 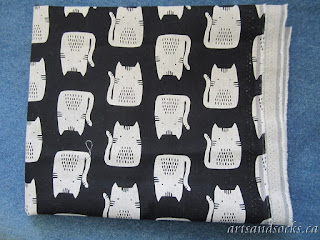 I made a trip to Mad About Patchwork, to buy more interfacing, and this followed me home. It is a linen blend, and I think I know what I will use it for.

Meanwhile, I was at the mall, today, with my delightful grandson and his Mommie, and I came home with this. 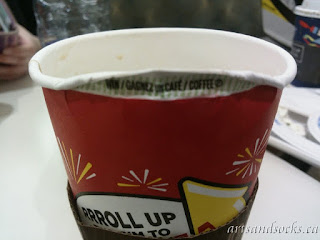 It is a bit hard to read, but all good Canadians will recognize this as a winning Tim Hortons RRRoll Up the RRRim cup. I won a coffee! I am such a cheap date! I was seriously excited.

Meanwhile, for the kitty fans, this is my current baby, dreaming of warmer days. 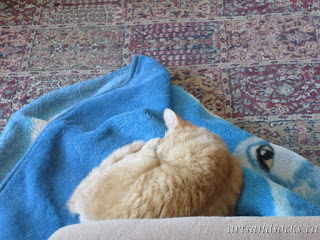 I am linking up to Needlework Tuesday, and the Needle and Thread Network.
Posted by Kate at 4:35 PM 8 comments: 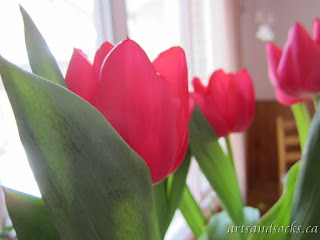 I feel like it should be spring, however, the temperature is -15C today, so not yet. These are the tulips in a pot on my counter. They are a happy dark fuchsia colour, a lovely contrast to the white stuff outside the window.

I finished up some projects, that have been hanging around. 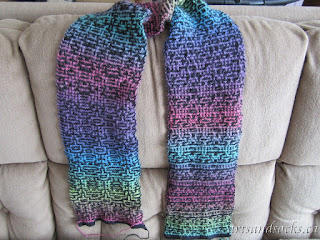 The mosaic scarf that was suppose to be an advent project is finally finished. It needs a blocking to straighten the edges, but it will be great, next winter (please, no more cold weather.)

The bag that was the sample for my bag making class got finished. I figured if I didn't finish it right away, it would be in the nearly complete stage forever. 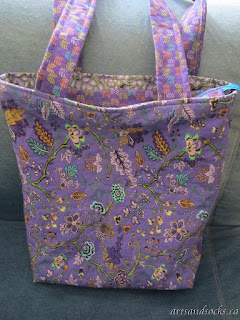 It is very purple, even for me. I did add a contrast pocket, on the inside. 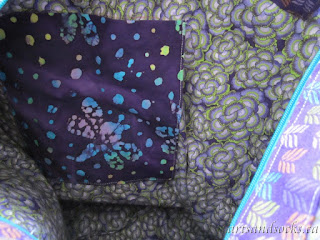 I made another pair of baby socks. Baby socks are my favourite gift for a new little person. These ones were completed for someone else, who wanted to gift a pair to a new mom. 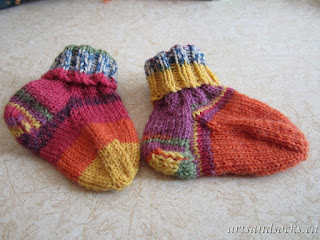 I love how the self striping yarn makes two really different socks, because they use so little yarn. this yarn is the greatest unisex yarn. It has a bit of everything.
Posted by Kate at 12:47 PM 9 comments:

I have been on a bag making binge.

I started with the sample I made for a possible class at my quilt group. 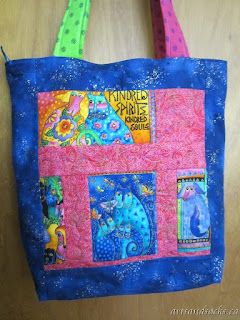 I got some takers for the class, so I needed to partially make a second bag, to show the steps. 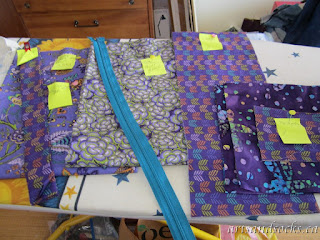 The pieces were cut and labelled. 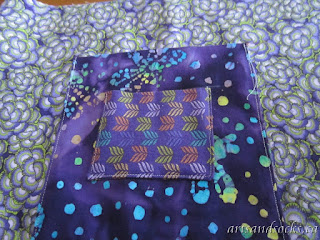 One side of the lining was made, to show how the pockets go on.

My little band of students finished the first part, last week. They were to go home and quilt their exterior pieces. So today, I finished the lining and did my quilting. 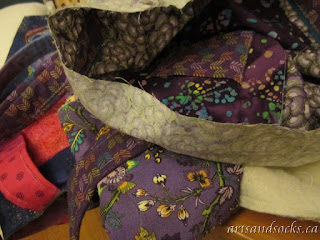 These pieces are ready for my class, tomorrow. I really must finish this one this week, before it becomes a UFO. I am sure I can find a taker for a purple bag.

Meanwhile, last year, my church group made a Dresden Plate quilt, to send with a group going to Virginia for a Habitat for Humanity build. The quilt will be given to the family who will live in the home, as a warm hug from Canada. 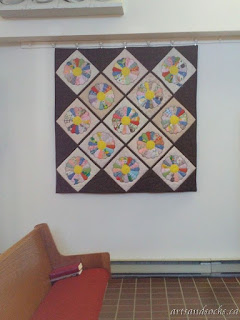 There were two blocks left over, and I volunteered to turn them into a tote for the quilt. Of course, I had a whole year to finish the tote, so I finished it yesterday, just in time to send it with the quilt. 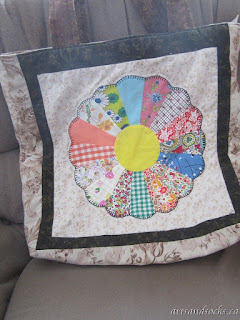 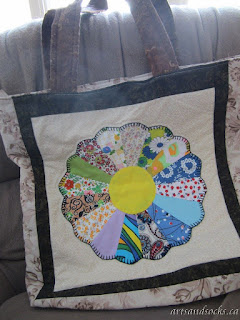 I used every scrap that was left from the quilt itself, plus another scrap that I thought worked for the handles. The edges and lining of the bag are made from the scraps of the baking. The bag has a zipper in the top, and with luck, the quilt will fit inside.

Anybody who has visited here more then once knows that I have a special place in my heart for homeless cats. For the record, I have never owned a cat. However, I have 4 grand-cats and have provided foster care for 170 cats, to date.

So, when I heard that the Lyndhurst Feral Cat Project was having an online auction for the Gananoque Humane Society, I was pleased to make a donation. 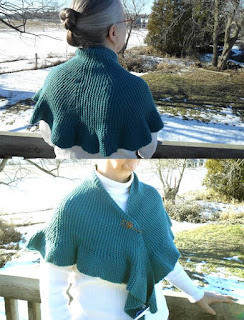 This is my Eyre of Romance Shawl, and it is one of over 100 items being offered this week.

If you would like to have a look at all the lovely items, many cat related, and perhaps bid on one or two, you can see them all here:
https://www.facebook.com/LFCPAuction2017
Posted by Kate at 8:12 PM 4 comments: